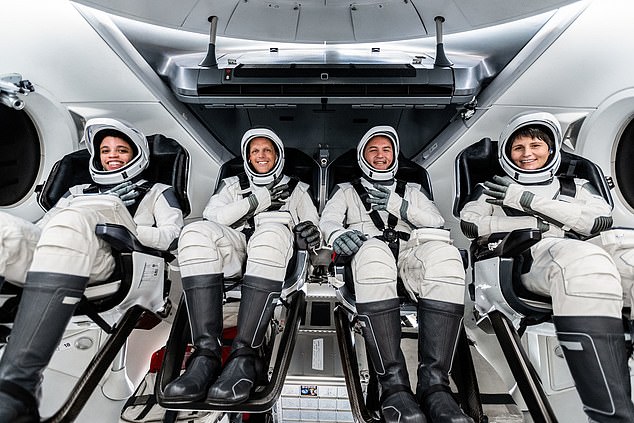 SpaceX crew name their new Dragon capsule ‘Freedom’ in tribute to Alan Shepard – the first American in space – and his Freedom 7 capsule: Spacecraft will take astronauts to the ISS

By Ryan Morrison For Dailymail.Com

The next SpaceX Crew Dragon capsule to take NASA and European Space Agency (ESA) astronauts to the ISS has been named ‘Freedom’ by its crew.

Known as the Crew-4 mission, it will carry NASA’s Kjell N. Lindgren, Robert Hines, and Jessica Watkins, and ESA’s Samantha Cristoforetti to the ISS no earlier than April 19.

The Expedition 67 astronauts named the spacecraft in honor of Alan Shepard, the first American in space – named for his spacecraft Freedom 7, flying on May 5, 1961.

SpaceX Crew Dragon ‘Freedom’ is the company’s fourth to be named by its crew, with the others given the titles Endeavour, Resilience, and Endurance, in order of launch.

The next SpaceX Crew Dragon capsule to take NASA and European Space Agency (ESA) astronauts to the ISS has been named Freedom by the crew. From left to right: Jessica Watkins, Robert Hines, Kjell Lindgren and Samantha Cristoforetti

‘The name celebrates a fundamental human right, and the industry and innovation that emanate from the unencumbered human spirit.’

This will be the fifth crewed spaceflight SpaceX has operated for NASA – after test flight Demo-2 and the three operational missions to the ISS in a Crew Dragon.

Overall, this will be the sixth Crew Dragon flight, with the other taking the fully private Inspiration4 crew into orbit for just short of three days last year.

SpaceX and NASA say the flight is on track to launch from the Kennedy Space Center in Florida on April 19.

‘Through the Commercial Crew Program, NASA and SpaceX have restored a national capability and we honor the ingenuity and hard work of those involved.

‘Alan Shepard flew on Freedom 7 at the dawn of human spaceflight. We are honored to bring Freedom to a new generation!’ said Lindgren.

Alan Shepard was one of the original Mercury 7 astronauts, and was the first American in space – launching on May 5, 1961.

He selected Freedom as his spacecraft name in light of the Cold War space race between the US and Soviet Union.

Crew Dragon Freedom is the second to draw inspiration from NASA’s past for a title, with the first given to the Demo-2 capsule – called Endeavour after the Shuttle.

‘Alan Shepard flew on Freedom 7 at the dawn of human spaceflight. We are honored to bring Freedom to a new generation!’ said Lindgren

‘We both had our first flights on shuttle Endeavour, and it just meant so much to us to carry on that name. So that is what we decided to go with,’ said Doug Hurley, who travelled to space with Demo-2 in May 2020.

Crew Dragon ‘Freedom’ was assembled at the SpaceX facility in Hawthorne, California, arriving at the Kennedy Space Center this month.

‘My whole career, ‘The Sound of Freedom’ was defined by jet noise. Starting April 19, it’s going to be even better,’ said Hines, Crew-4 pilot,

‘We have named our spacecraft Freedom, in honor of the freedoms we hold so dear. Tune in on April 19th to listen to the Sound of Freedom as Crew-4 launches to ISS!’

On the morning of May 5, 1961, astronaut Alan Shepard crawled into the cramped Mercury capsule, “Freedom 7,” at Launch Complex 5 at Florida’s Cape Canaveral Air Force Station.

The slender, 82-foot-tall Mercury-Redstone rocket rose from the launch pad at 9:34 a.m. EST, sending Shepard on a 15-minute suborbital flight.

He reached an altitude of 116.5 miles above the surface, travelling 303 miles and reaching a maximum speed of 5,134 miles per hour.

The main scientific objective of project Mercury was to determine man’s capabilities in a space environment and in those environments to which he will be subject upon going into and returning from space.

Each flight after Shepard expanded on that object, going higher, longer and doing more while in space – but Shepard was the first American to leave Earth.

He was beaten to space by Soviet cosmonaut, Yuri Gagarin who travelled in the Vostok 1 capsule, completing one orbit of the planet on April 12, 1961.