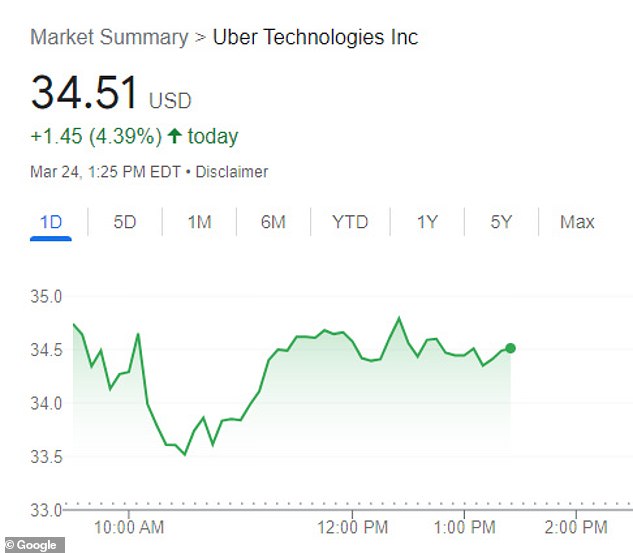 Uber announced Thursday that New Yorkers will soon be able to hail a yellow cabs via its app – news that led to a more than four percent spike in Uber’s stock price.

The ridesharing company said it decided to team up with its one-time rival the NYC Taxi and Limousine commission in an attempt to help ease pandemic-era driver shortages.

As part of the deal the two taxi-hailing apps currently used by New York City taxis will integrate their software with Uber’s, allowing anyone using the Uber app to book a yellow cab.

The apps, operated by Curb and Creative Mobile Technologies, are currently used by nearly 14,000 taxis in the city, Uber said.

Uber announced the team up with yellow cabs, its one time rival on Thursday in an attempt to help ease driver shortages

The two taxi-hailing apps used by New York City Taxi’s will integrate their software with Uber’s, allowing anyone using the Uber app to book a yellow cab

The two companies enable credit-card payments in taxis as well as display the news, run weather updates and ads in screens located inside the vehicles, The Wall Street Journal reported.

‘This is a real win for drivers – no longer do they have to worry about finding a fare during off peak times or getting a street hail back to Manhattan when in the outer boroughs,’ Director of Business Development for Uber Guy Peterson said in a statement. ‘And this is a real win for riders who will now have access to thousands of yellow taxis in the Uber app.’

The feature will fully rollout in the summer but in the lead up a limited amount of New Yorkers will be able to hail yellow cabs from the Uber app.

Uber customers will pay the same for taxi rides as they do for Uber X rides and cab drivers will be paid on the same scale as Uber drivers, the company confirmed.

The collaboration comes after years of rivalry between the taxi industry and ridesharing companies, which have been blamed for lowering the value of taxi medallions

The deal has been described as a ‘win-win’ by Bruce Schaller, a former city transit staffer and taxi policy guru.

Schaller told the New York Post it is a ‘landmark moment’ for the industry.

‘I think it’s a really good thing for the industry to sort of converge in this manner,’ Schaller said.

The San Francisco-based company has tried this strategy before in other countries, forming alliances with taxis as a growth strategy, WSJ reported.

Uber has teamed up with taxi services  in Barcelona, Austria and Hong Kong and according to Uber’s global mobility chief Andrew Macdonald, 35 percent of people who started using the app to hail a taxi ended up using other Uber products like its food delivery service Uber Eats.

The deal comes as Uber deals with a driver shortage caused by the pandemic that has been exacerbated by soaring gas prices.

The team-up will give drivers a chance to secure a return passenger on trips to the outer boroughs, when they frequently come back empty, which has become costly due to gas prices.

Drivers who left because of the pandemic have been reluctant to come back because they found work elsewhere or continue to collect unemployment.

Russia’s intensifying war in Ukraine has also helped push gas prices higher in the US. The average U.S. price of regular-grade gasoline rose 79 cents over the past two weeks to a record-setting $4.43 per gallon (3.8 liters).

Earlier this month, gas prices surged to the highest level since 2008, as the war dramatically impacts the cost of crude oil.

All the money will go directly to drivers, Uber said, and isn’t meant to cover the entire cost of gas, but to ‘soften the burden.’

The surcharge will be in effect for at least 60 days, after which Uber said it will assess gas prices and driver sentiment.

The surcharges are based on the average trip distance and the increase in gas prices in each state, Uber said.

The collaboration comes after years of rivalry between the taxi industry and ridesharing companies, which have been blamed for lowering the value of taxi medallions.

Because taxi drivers in New York City are required to own them, medallions were once extremely valuable and highly coveted because the demand for cabs was stable.

But in the years since Uber and similar companies disrupted the industry, a medallion’s value has fallen from as much as $1 million to just $200,000.

Drivers working for Uber and other app-based companies don’t need medallions, and many taxi owners who thought their medallions would continue to grow in value say they are now hundreds of thousands of dollars in debt.