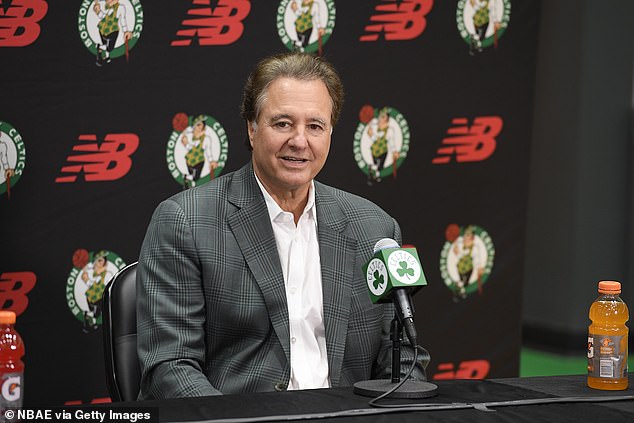 The consortiums still involved in the £3billion race to buy Chelsea will seek to improve their bids during the closing stages of the sale process.

The group led by US tycoon Todd Boehly have received formal notification from merchant bank Raine, who are advising Chelsea on the sale, that they have have made shortlist of preferred bidders, as have the consortium fronted by Sir Martin Broughton and Lord Coe – but heavily funded by Crystal Palace shareholders David Blitzer and Josh Harris.

The Ricketts Family’s bid, that has been at the centre of a major backlash from supporters over a series of leaked emails from patriarch Joe in which he calls Muslims the ‘enemy’, has also been informed they have also made the next stage of the process.

They are joined by Boston Celtics owner Stephen Pagliuca, who co-chairs private equity group Bain Capital, on the final shortlist.

The consortium led by LA Dodgers part-owner Boehly, that also includes Swiss partner Hansjorg Wyss and British businessman Jonathan Goldstein, and the group fronted by Broughton and Coe are believed to be the two early favourites to buy the club from current owner Roman Abramovich.

It remains to be seen what impact Blitzer and Harris’ shareholding at Palace will have on the Broughton and Coe bid given the US pair will have to divest their ownership at Selhurst Park, which could be a lengthy process. Sources have also indicated that Broughton’s son Michael is also involved.

The bid from the Ricketts family has also been shortlisted, despite widespread public concern about their potential ownership given anti-Muslim comments made by Joe Ricketts (pictured)

Sources have indicated that Boehly’s offer is just south of £2.5bn, while the Broughton and Coe bid is said to be just below that.

The Ricketts Family, together with partner Ken Griffin – who is worth in the region of £20bn – will believe they are now in with a real chance of acquiring Chelsea despite the vast opposition from supporters.

Pagliuca’s personal fortune is said to be far less, at around £3bn, but through investment vehicle Bain, the 67-year-old can finance a competitive offer for Chelsea.

However, the fact Pagliuca owns a 55 percent stake in Serie A side Atalanta, could prove an issue to the American’s bid under UEFA rules.

And while all four shortlisted parties have lodged their initial offers, Sportsmail has learned that consortiums are willing to up their bids during the crucial second phase – and will seek clarity over whether they are permitted to do so.

That scenario would effectively turn the next round of the process into an auction.

But while the size of the offers will be pivotal in deciding which offer is concluded to be the preferred bidder – parties have been told that the cash offers are not the only factor.

Arguably, the Ricketts’ passage into the next round came as the biggest surprise.

In an attempt to placate the anger towards their bid, Tom Ricketts released a statement that read: ‘My family and I are very grateful to all the fans and supporters’ groups who took time to meet with us this week and share their passion and concerns for Chelsea Football Club. It’s clear you have nothing but the best interests of the club at heart.

‘We have listened to all of your feedback – including from the Chelsea Supporters’ Trust – and are grateful that the door is still open for us to demonstrate our commitment to working with fans to protect the club’s heritage.

‘It is now up to us to redouble our efforts and clearly lay out a vision for our stewardship of the club with diversity and inclusion at its heart.’

Saudi Media Group, headed by Mohamed Alkhereiji (pictured at Stamford Bridge stadium in November, when Chelsea drew 1-1 with Manchester United) has not made the final shortlist

Earlier in the day the Chelsea Supporters Trust released their own statement that read: ‘It is essential that the new owners of the club has the confidence of the supporter base and demonstrate an understanding of the values that we stand for.

‘That is why the strength of feeling towards the Ricketts family bid from Chelsea supporters cannot and must not be ignored.

‘The CST are grateful to the Ricketts family for meeting with us this week. We challenged them on all of the points supporters have raised concerns about.

‘However, our concerns about their ability to run an inclusive, successful club on behalf of our diverse supporter base around the world have not yet been allayed.’

Elsewhere, Candy’s involvement in the process appears to be drawing to a close.

His Blue Football Consortium that, led by Catalina Kim, included backing from South Korean financial institutions and a tie-up with Gianluca Vialli’s investment fund have been told they have not progressed.

Candy is said to have been in talks with other consortiums about joining forces, but his chances suffered another blow after Kim appeared to indicate the funding from South Korea had been withdrawn.

‘We, the group of C&P Sports, Hana Financial and other strategic investors from South Korea, were suggested to join another Consortium. We thank Mr Nick Candy for our journey and wish him the best of luck for his future,’ read the statement from Kim.