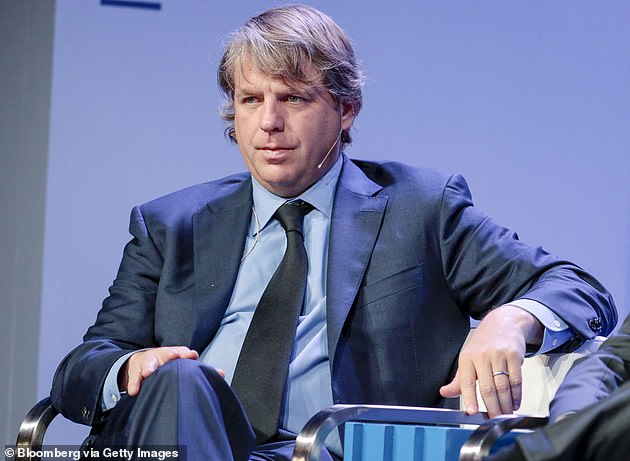 By Matt Hughes and Sami Mokbel for the Daily Mail

The consortium led by Todd Boehly have been informed they have made the shortlist of preferred bidders to buy Chelsea.

The group led by Sir Martin Broughton and Lord Coe – but heavily funded by Crystal Palace shareholders David Blitzer and Josh Harris – have also made the second round.

The £3billion battle to buy Chelsea has intensified with Roman Abramovich’s sales advisers dismissing several bidders from the process.

The Raine Group, the finance firm running the auction for the club, are understood to have told a number of would-be buyers — including New York Jets owner Woody Johnson, the Saudi Media Group and Turkish businessman Muhsin Bayrak — that their bids will not make it to the next stage.

While Raine have yet to produce an official shortlist the field appears to have narrowed considerably and looks like being dominated by American billionaires who already own sports franchises in the United States.

Saudi Media Group, headed by Mohamed Alkhereiji (pictured at Stamford Bridge in November when Chelsea drew 1-1 with Manchester United) has not made the final shortlist

The consortium led by LA Dodgers part-owner Boehly, whose Swiss partner Hansjorg Wyss first alerted the world to Abramovich’s decision to put Chelsea up for auction, have made it through to the next stage, with their main competition appearing to come from the larger American group funded by Harris and Blitzer.

Former Liverpool chairman Broughton and fellow Chelsea fan Lord Coe have been presented as the public face of that bid, although the bulk of the funding is believed to be coming from Philadelphia 76ers owner Harris and another major figure from the NBA, Sacramento Kings owner Vivek Ranadive.

British property developer Nick Candy, whose Blue Football Consortium contains backing from South Korean financial institutions and a tie-up with Gianluca Vialli’s investment fund, is hopeful of staying in the race, although there was uncertainty over the status of a bid from the Ricketts family, who own the Chicago Cubs baseball franchise.

The Ricketts bid has led to protests from some Chelsea fans as a result of anti-Muslim comments made by the family patriarch, Joe Ricketts, in 2019, but their partnership with hedge-fund billionaire Ken Griffin has made their offer financially attractive.

On a day of considerable confusion and some acrimony, disappointed bidders demanded explanations for being ruled out, which delayed the process of beginning the next round of the auction and caused frustration elsewhere.

Raine are believed to have encouraged some of the competing groups to merge in an attempt to secure a bigger fee that will also be politically acceptable to the Government.

Candy is understood to have been approached by several parties, including the Ricketts family, about a joint venture with talks continuing on Thursday night.

Whoever buys Chelsea will require the Government’s consent in the form of a special licence to proceed with the sale, as well as to gain the approval of the Premier League by passing their owners’ and directors’ test, which can take as little as 10 days but took 17 weeks for the Saudi state-backed takeover of Newcastle United.

The Saudi Media Group claimed their bid for Chelsea did not include any state funding, but the need for a quick sale and the Premier League’s sensitivity to fears of a conflict of interest counted against them.