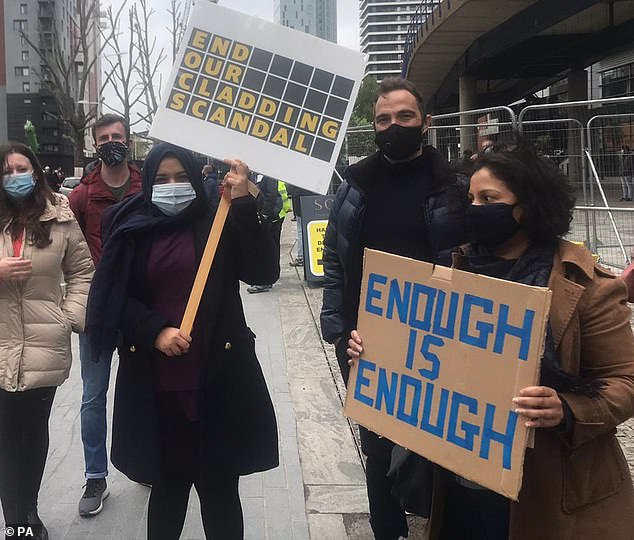 Cladding hit flat owners have welcomed changes announced by ministers to help protect them, but insist that ‘the crisis isn’t over’.

The amendments are to the Building Safety Bill, which is currently going through the House of Lords and aims to improve building safety regulations following the Grenfell fire.

The Bill’s amendments include the scrapping of the legal requirement for building owners to appoint a building safety manager, as well as the building safety charge used to pay for the managers.

The Government has announced some amendments to the Building Safety Bill, including the scrapping of new building safety managers

Concerns about these issues have been raised by leaseholders in recent weeks, who welcomed their removal.

Leaseholder Liam Spender said: ‘We appear to be making another incremental step toward a solution.

‘We have come a long way, but we are still missing the details that would enable us to say the crisis is over.’

Other amendments to the Bill will mean that the protections to prevent leaseholders from being charged for cladding work will be extended to those who own up to three properties.

And leaseholders in lower value properties will not be charged for any remediation work at all.

Levelling Up Secretary Michael Gove said: ‘I am taking measures further by providing greater powers to go after those responsible for building safety defects, eliminating costs for leaseholders in lower value homes and increasing support for small landlords.

‘No leaseholder should pay the price for shoddy development and we have listened to their concerns, removing the requirement for a separate building safety charge and scrapping compulsory building safety managers, to help avoid unnecessary costs.

‘There is more to do, but this package builds on the legal protections I set out earlier this year and will help to bring this scandal to an end and make industry pay.’

The amendments are to the Building Safety Bill, which is currently going through the House of Lords and aims to improve building safety regulations following the Grenfell fire

The Bill originally required landlords of higher blocks to recruit a building safety manager to make sure they complied with fire safety rules.

Landlords would have been allowed to recover some of the cost of hiring the managers through a new charge on flat owners.

But there was an outcry among leaseholders who said it was just another way of imposing costs on them. They said that their buildings already had managing agents in place that could fulfil that role.

It follows ministers saying last month that leaseholders in blocks above 11 metres tall would not be charged for any cladding work, and the amount that could be charged for other safety work is being capped at £10,000, and £15,000 in London.

The new amendments have clarified that residents living in properties worth less than £175,000 outside of London and £325,000 in London cannot be charged anything for any type of remediation work.

At the time of the earlier announcement, there was confusion about whether buy-to-let landlords would be covered by the funding.

But Mr Gove has now also clarified the position on this issue, saying that the protections will be extended to those owning up to three properties.