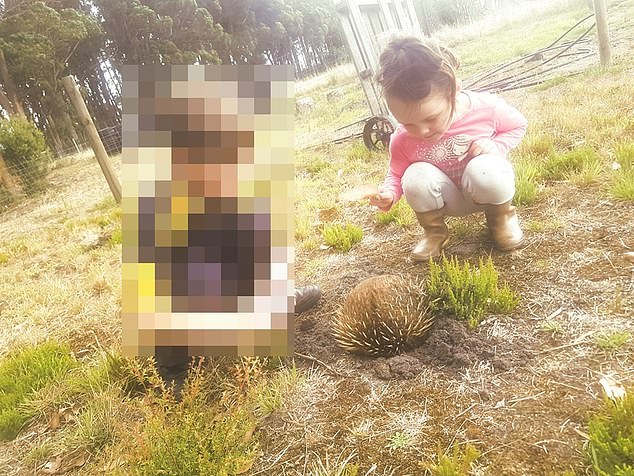 Missing four-year-old Shayla Phillips gazes curiously at an echidna beside her big brother in what was her last photo published before she went missing.

Pictured in the same gumboots she went missing in, the photo was taken just days before she vanished from her mother’s backyard in Stormlea, in Tasmania’s south-east.

Shayla had been playing with her neighbour’s two dogs about 2.30pm on Wednesday afternoon and has not been seen again.

Shayla and her mum Bianca in happier times

Shayla with her brother before she vanished without a trace

The image was only posted on social media by Shayla’s mum, Bianca, days ago.

On Friday, sniffer dogs from Victoria Police helped Tasmanian police in the search for the missing child.

Shayla has now been missing for two full nights but search and rescue teams said there is some reason for hope as temperatures have not fallen dramatically overnight – hitting 13C last night, and about 10C the night before.

‘Tasmania Police are doing everything we possibly can to bring little Shayla back safely to her mum,’ Mr Higgins said.

‘We absolutely need to be positive there’ll be a good outcome. But we will continually reassess as well and take advice from the medicos and experts.’

Mr Higgins said police had no reason to believe there was anyone involved in Shayla’s disappearance.

The bush tracker warned it could be weeks before Shayla was found and urged searchers not to give up, no matter how long it has been.

‘Even a trained expert could easily miss someone – they don’t see the kid curled up in a tiny little ball behind a tree,’ Mr Cassar said.

Shayla remained missing on Friday despite an exhaustive police search

Search and rescue teams are hopeful they will soon find a four-year-old girl (pictured, Shayla Phillips) missing in remote Tasmania as they are assisted by interstate police and good weather

A survival expert (pictured, Jake Cassar) who helped find three-year-old AJ Elfalak in remote NSW in September said search crews would need to revisit places in the chance the four-year-old retraced her steps

Four nearby dams were reportedly searched and cleared on Wednesday night.

Mr Cassar said several factors could influence how long Shayla could survive on her own – including access to drinking water.

‘I don’t know how cold it is – that would be something that needs to be considered,’ he said.

‘If she’s been able to get herself to shelter, to water (she’ll be OK). Humans can go three to four weeks without food.

‘I’m just really hoping they don’t start to wind things up. What I hope will occur is at least several weeks of searching.

‘If I could afford to drop everything I’d be there in a heartbeat.’

Mr Cassar said he was discouraged when search efforts were wound back during the search for AJ – even though the boy turned out to be alive and well in the bush the whole time.

Mr Cassar warned one of the risks of a missing person being caught out in the cold was the risk of catching hypothermia – a fear he held when searching for missing AJ.

He was relieved to hear temperatures had not plummeted too low in Stormlea, where Shayla vanished from.

When Shayla’s mother, Bianca, went to check on her daughter after 30 minutes she found the girl and the dogs had disappeared (pictured, Shayla Phillips, 4, riding on a lawn mower)

Shayla Phillips vanished from her mother’s backyard in Stormlea, southeast of Hobart, while playing with a neighbour’s two dogs at 2.30pm on Wednesday

Shayla’s mum had gone to check on her daughter after 30 minutes when she found her and the dogs had disappeared.

Bianca called Tasmania Police at 3pm after frantically searching the property herself.

Shayla was wearing pink leggings, a cream top and gumboots when she was last seen.

Inspector Gavin Hallett said the two dogs Shayla had been playing with had been found ‘quite a distance away’ from their original location.

One was found by the next morning, about 800m away from the property.

‘That’s an indicator to us, that if there had been some untoward activity the dogs wouldn’t have been gone, they would have been here,’ he said on Thursday.

Inspector Hallett said Shayla was ‘a very healthy, happy young child’, and described her mother as ‘stoic and strong’.

He said the little girl was known to go missing for up to 15 minutes at a time during games of hide and seek but had failed to return on this occasion.

Inspector Hallett said all police resources are on hand, searching the difficult terrain for signs of the missing girl

Tasmanian Police have launched an extensive air and land search for the little girl however no trace of the ‘healthy, happy’ child has been found

Three-year-old AJ Elfalak (pictured) was found near his family’s property in Putty, 150km northwest of Sydney in the Upper Hunter Valley, after spending three nights on his own