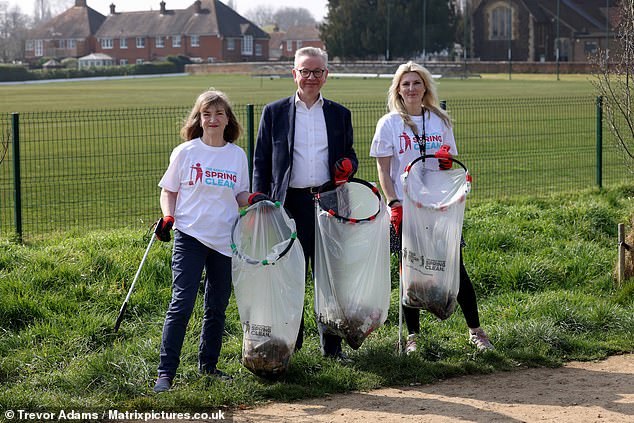 Level up your local area… by picking litter like Michael Gove: Great British Spring Clean gets off to a flying start as minister takes to the streets of his Surrey Heath constituency

The Daily Mail is once again calling on its army of readers to roll up their sleeves and fight back against the scourge of litter.

And with weather forecasters predicting a sunny weekend for most, there could not be a better time to level up your local area by picking up rubbish – just like Mr Gove has done.

The Levelling Up Secretary yesterday took to the streets of Chobham in his Surrey Heath constituency to join a litter pick. Not afraid to get his feet wet, the minister picked up cans, bin bags and plastic bottles which had been dumped in a river in the picturesque village.

The campaign, which runs until April 10, is also backed by Prime Minister Boris Johnson, Chancellor Rishi Sunak and has cross-party support.

Mr Gove said: ‘Keep Britain Tidy are doing an amazing job because we all know how important clean, green, open spaces are. During the pandemic, exercise outside was an indispensable part of life.

‘We also saw an increase in fly-tipping and some of the public spaces people rely on became polluted and strewn with rubbish, so there couldn’t be a better time to contribute to restoring and enhancing our natural environment.

‘The Daily Mail has been absolutely superb in the leadership they have shown on environmental issues generally, but also in backing the Great British Spring Clean and the campaigns it has done on parks through to now, litter and rubbish, the Mail is an environmental beacon.’

So far, 279,650 people– armed with litter-pickers, gloves and bin bags – have signed up. Philippa Anderson, deputy chairman of Keep Britain Tidy, said: ‘If you’re litter-picking, you’re not only making a difference but you’re able to enjoy the fresh air and it gives you a great sense of teamwork.’

How can I get involved?

Anyone can join the campaign – although children should be accompanied by a responsible adult. Simply visit the website www.gbspringclean.org and click ‘Pledge’. You can pledge as a group, an individual or as a school.

Register your details – that’s just your name, postcode and email address – and indicate how many bags you plan to pick up for your personal #BigBagChallenge. We consider a bag to be, more or less, the size of a small bin bag, filled about 3/4 to allow for a knot to be tied. You can also say how many minutes you will take part for.

What should I bring?

It’s recommended that you use a litter-picker and some gloves as a minimum, and carry hand sanitiser. You should also wash your hands regularly. Of course, you will also need a bag to put the litter in.