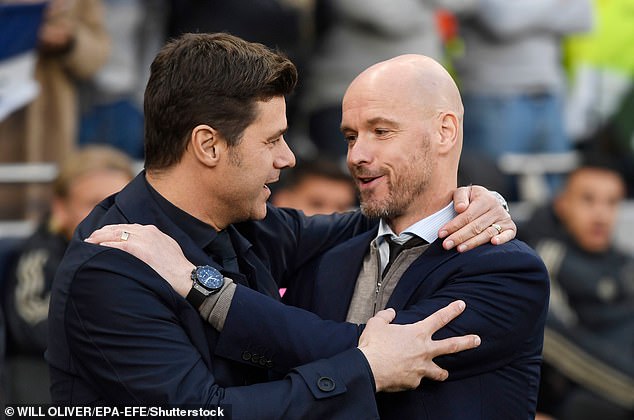 Manchester United are under pressure to make a decision over their new manager with leading candidates Erik ten Hag and Mauricio Pochettino attracting interest from other clubs.

Sportsmail revealed that Ajax boss ten Hag had an interview with United on Monday, although it’s understood he is not the first candidate to hold formal discussions with the club’s new chief executive Richard Arnold.

Pochettino, meanwhile, is believed to have spoken to United’s football director John Murtough some weeks ago and will be interviewed soon, but the Paris Saint-Germain coach is waiting to hear back.

Manchester United are under pressure to make a decision on their new manager, with both Mauricio Pochettino (left) and Erik ten Hag (right) expected to leave their clubs this summer

United are said to be respectful of PSG’s situation and keen to conduct their manager search in the right way.

Old Trafford sources said on Thursday night that the process is running to plan and is well progressed, but indicated an announcement on the new manager could still be weeks away.

Ten Hag and Pochettino are widely expected to leave their current clubs this summer regardless of whether they land the United job.

Pochettino has been linked with Real Madrid and it’s understood that an approach from the Spanish club may be imminent.

Sportsmail revealed Ajax boss ten Hag had an interview with United on Monday, although he is not the first candidate to hold formal discussions with new chief executive Richard Arnold

Although Carlo Ancelotti has guided Real to the top of LaLiga with a nine-point advantage and into the Champions League quarter-finals, Bernabeu bosses are said to be unhappy over the style of play and are considering a change of manager.

Ten Hag is known to have spoken to two other European clubs that play regularly in the Champions League, and has a firm offer from one that interests him.

Reports in Holland suggest it is still possible he could stay at Ajax, having signed a new contract after an unsuccessful interview with Tottenham last year.

Sevilla coach boss Julen Lopetegui is believed to be another name on United’s shortlist along with Spain boss Luis Enrique. However, Enrique’s preference to stay in his job until after the World Cup at the end of this year could count against him.

Meanwhile, the club are hoping to tie Bruno Fernandes to a new long-term deal at Old Trafford

United sources wouldn’t confirm who is on the shortlist last night but said there have been conversations with multiple candidates, initially with Murtough and technical director Darren Fletcher and now Arnold.

Meanwhile, United are hoping to tie Bruno Fernandes to a new long-term contract. Fernandes has been one of the club’s standout players since arriving from Sporting Lisbon two years ago, contributing 49 goals and 39 assists in 117 games.

It emerged in January contract talks were being put on hold until the end of the season, but sources close to the Portugal star said then it was ‘a question of time’ before he agrees improved terms believed to be in the region of £12million a year.

Although Fernandes is under contract until 2025, United are keen to secure his future with a number of players set to leave Old Trafford this summer.