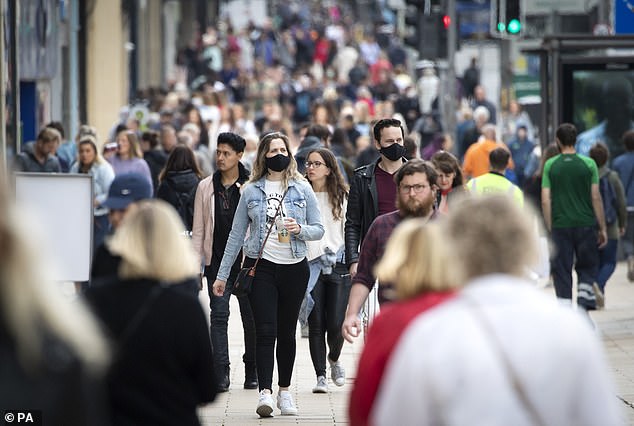 More than a million people could be pushed into ‘absolute poverty’ after Rishi Sunak’s mini-budget, think-tank warns

More than a million households could be pushed into poverty while the richest face losing £3,000 a year after the Chancellor’s mini-Budget, a think-tank warned yesterday.

It said UK households face an average real-terms squeeze of £1,100 this year.

The Resolution Foundation said from next month 1.3million more households will be pushed into ‘absolute poverty’ – defined as having an income below £14,000 for a childless couple and £8,000 for a single person.

It will be the first time Britain has seen such an increase outside a recession.

It added that the largest falls will be among the poorest quarter of households where incomes are set to fall by 6 per cent – £310 – while the richest face a real-terms squeeze of £3,206 – 2 per cent of their income.

UK households face an average real-terms squeeze of £1,100 this year, according to a think tank. Pictured: Shoppers in Princes Street, Edinburgh, on Thursday

The Chancellor Rishi Sunak pictured during a visit to Caunton Engineering, a steel manufacturing business, in the East Midlands on Thursday

He insisted: ‘The policies do not measure up to the rhetoric.’

Despite the increase to the national insurance threshold from July and a 1p cut in the basic rate of income tax in 2024 promised by Mr Sunak, of the 31 million people in work, around 27 million will pay more in income tax and NI in 2024/25.

Mr Bell said: ‘In the face of a cost-of-living crisis that looks set to make this Parliament the worst on record for household incomes, the Chancellor came to the dispatch box yesterday promising support with the cost of living today, and tax cuts tomorrow.’

He said Mr Sunak ‘has prioritised rebuilding his tax-cutting credentials over supporting the low-to-middle income households who will be hardest hit from the surging cost of living’.