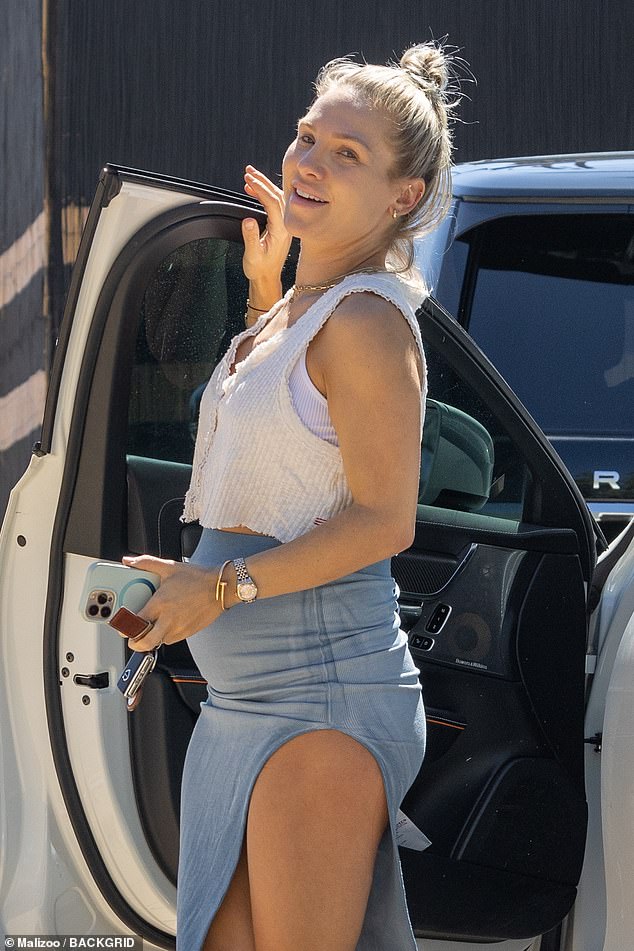 And on Thursday, having just past the 25-week mark of her pregnancy, the Dancing With The Stars pro proudly flaunted her burgeoning baby bump while out on a shopping run in Malibu.

The Australian ballroom dancer was all smiles when she stepped out in a fitted denim skirt and crop top combination that showcased her growing tummy.

Proud mama to-be: Sharna Burgess, 36, was happy to flaunt her pregnancy when she stepped out for a shopping run in Los Angeles on Thursday

Burgess, 36, was first spotted making a stop at a store dressed in the leggy ensemble.

With a slit down the left side, the skirt put her gams out on display, while also hugging her pending bundle of joy.

The white top was cutoff just above her belly and worn over a classic white tank top.

In keeping with her casual theme in the fashion department, Burgess also donned a pair of tan Nike sneakers, while her long blonde locks were pulled up into a loose bun.

Her Thursday also included taking to Instagram to post a video of herself dressed down in a tan sports bra, seemingly makeup free. And then, after a simple video edit, she flashed forward to show her all dressed up in a stylish blouse and top, and her hair and makeup all done up.

‘Mama dressed UP today,’ she proudly declared in the caption of the clip.

The New South Wales, Australia native also took to Instagram to post a ‘before and after’ video that showcased her in a simple crop top without makeup, and then her all made up in a blouse after a simple video edit

Feeling confident: The DWTS troupe member revealed, ‘Mama dressed UP today’ in the caption of her Instagram post on Thursday

Glowing: Burgess showed off her glow that only a pregnant woman can shine

The New South Wales, Australia native would cap off the ‘before and after’ video by offering a confident and playful wink towards the camera.

While this will be baby number one for Burgess, Green has four children from previous relationships: a son Kassius, 20, with actress Vanessa Marcil, and sons Noah, nine, Bodhi, eight, and Journey, five, with ex-wife  and actress Megan Fox.

Green and Burgess have been dating since October 2020.

They announced they were expecting their first child together on February 4, 2022.

Romance: Green, 48, and Burgess, who have been dating since October 2020, announced they were expecting their first child together on February 4, 2022