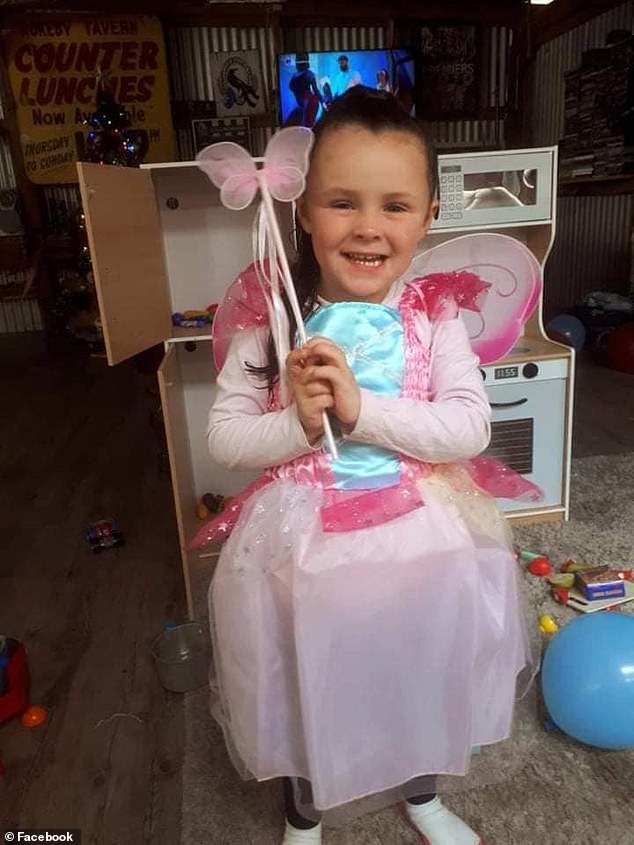 Missing four-year-old Shayla Phillips has been found after a miracle chance sighting by a search volunteer just 500m away from a nearby home after two nights lost in thick Tasmanian bushland.

The little girl was last seen playing with her neighbour’s two dogs about 2.30pm on Wednesday in her mother’s backyard in Stormlea, not far from Port Arthur in the state’s south.

It is believed she followed the dogs into the bush, one of of which later returned to where the family was staying.

A ‘disoriented’ Shayla was found when she popped her head up at the exact moment an SES volunteer happened to be scanning a ‘sloping’ area of thick bushland.

‘She had been lying down and stuck her head up, it was just the right place, right time,’ said Tasmania Police Inspector Gavin Hallett.

‘Had the SES volunteer been looking to the left and not the right at that moment we could still be looking,’ he said.

He confirmed the area she was found had already been searched by air unsuccessfully.

Searchers had to scour dense bushland metre-by-metre ‘on their hands and knees’ to find Shayla, who followed the family’s two dogs into daunting terrain

Inspector Hallett said the ‘dehydrated’ four-year-old was quickly reunited with her mother in an emotional scene.

He added that police were satisfied early on ‘nothing untoward’ had led to her disappearance, which meant searchers could focus on a ‘contact search’ operation.

That means searchers had to scour the dense surrounding bushland metre by metre, often on ‘their hands and knees’.

‘That’s what searchers did. No one wavered I their resolve to find Shayla safe,’ he said.

A 100-strong team of emergency service workers scoured surrounding bushland for two days, often ‘on their hands and knees’ through thick mud before she was found on Friday afternoon.

A 100-strong team of emergency service workers scoured surrounding bushland for two days, at times on their hands and knees through thick mud

The little girl was last seen playing with her neighbour’s two dogs about 2.30pm on Wednesday afternoon in her mother’s backyard in Stormlea

It’s understood she was found several hundred metres south of her home near Halls Road and will be taken to Hobart by ambulance.

Authorities are said to be ‘amazed’ the young girl was found, with hopes rapidly fading given the unforgiving terrain and dense bushland.

Sniffer dogs, helicopters, horses and thermal imaging drones had all been used in the desperate search.

Search and rescue teams were hopeful the youngster would be found safe and well,  as temperatures had not plunged dramatically over the past two nights – hitting 13C on Thursday night, and about 10C the night before.

Four nearby dams had been searched on Wednesday night after the alarm was raised.

SES workers are seen at the search for the four-year-old in Stormlea, Tasmania

Shayla’s mother Bianca had gone to check on her when she found her and the dogs had disappeared. The animals were later both found.

She called Tasmania Police at 3pm after frantically searching the property herself.

Shayla was wearing pink leggings, a cream top and gumboots when she was last seen.

Inspector Gavin Hallett said the two dogs Shayla had been playing with had been found ‘quite a distance away’ from their original location.

‘That’s an indicator to us, that if there had been some untoward activity the dogs wouldn’t have been gone, they would have been here,’ he said on Thursday.

He said the little girl was known to go missing for up to 15 minutes at a time during games of hide and seek.

Survival expert Jake Cassar, who helped find three-year-old ‘miracle boy’ AJ Elfalakwhen when he wandered off from his parents in remote NSW bushland last September, had earlier urged searchers not to give up looking for little Shayla.

‘Even a trained expert could easily miss someone – they don’t see the kid curled up in a tiny little ball behind a tree,’ Mr Cassar earlier told Daily Mail Australia.

He added several factors could influence how long Shayla could survive on her own – including access to drinking water.

‘I don’t know how cold it is – that would be something that needs to be considered,’ he said.

‘If she’s been able to get herself to shelter, to water (she’ll be OK). Humans can go three to four weeks without food.’