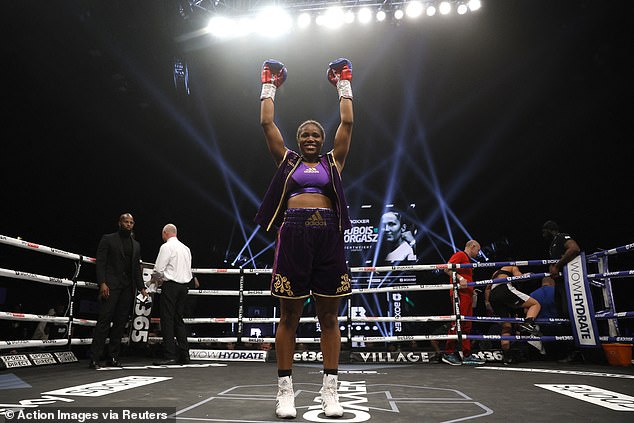 Caroline Dubois blitzed her way to a second win of her professional career with a devastating 49-second stoppage of Martina Horgasz at Wembley Arena.

Dubois – the sister of heavyweight star Daniel – was dominant from the first second and it looked inevitable this fight would not go the full six rounds as she began on the front foot and landed a series of powerful hooks.

And with less than a minute on the clock the Hungarian looked in serious trouble as Dubois pinned her against the ropes and landed a crunching body shot to her ribs – Horgasz wincing in agony as the referee ushered the Brit to the corner.

After a quick assessment of Horgasz he quickly determined she was in no state to continue – waving off the fight as Dubois raised her arms aloft in delight.

There will be tougher challenges on the horizon for Dubois. This was an opponent who had been beaten in each of her last six fights – but her initiative and aggression will make her a tricky test for anyone in the lightweight division.

Dubois credited the win to her diligence in improving her body shots in the gym.

‘It’s crazy, it doesn’t feel real to be honest,’ she said.

‘All week and all camp Shane (McGuigan) has been working on body shots and sitting down on my punches.’

McGuigan admitted he wanted Dubois to ‘slow down’ after her lightning-fast victory, but hailed her as an ‘unbelievable talent’ who would only show more of her ability when she comes up against stronger opponents.

‘What I see in the gym every day is an unbelievable talent,’ he said.

‘She is calm, has amazing vision, great punching power and good balance. You’re going to see it all once she starts getting tested.’

Dubois was far more explosive here than her first fight – where she was taken the distance against Lithuanian veteran Vaida Masiokaite last month on the undercard of Chris Eubank vs Liam Williams in Cardiff, winning with a scorecard of 60-54.