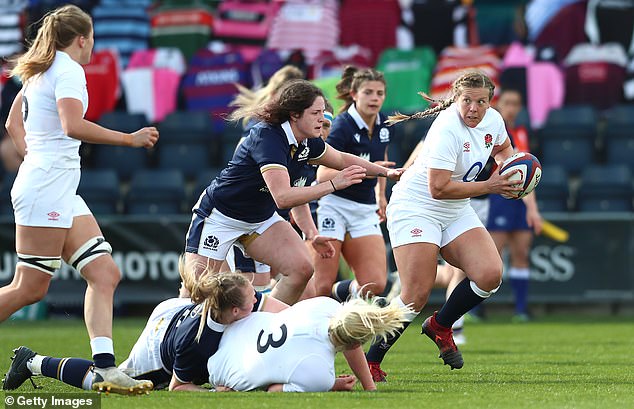 By Nik Simon for the Daily Mail

England have been tipped to use this year’s Six Nations as a launch pad for a successful World Cup challenge.

Simon Middleton’s team are targeting the double in 2022 by securing the European and global crowns.

They kick off their campaign against Scotland on Saturday and former centre Rachael Burford believes now is the time to lay the foundations.

‘England are clearly the favourites,’ Burford told the Evening Standard.

‘They’re on an 18-match winning streak and going for a hat-trick of Grand Slams.

‘They’ve been missing some of their big names but Emily Scarrett is back and the boost that her presence brings, with her experience, calmness and composure, can’t be overstated.

‘But this is the Six Nations with a World Cup in mind.

‘I expect England coach Simon Middleton to embed a few other players for the opening games before settling on the side that we’ll see for the most part at the World Cup against Ireland and France.’

Former England fly-half Katy Daley-Mclean, who won 116 caps for her country, said: ‘France and England will be the dominant sides in the tournament. England look sharp. With the depth in the squad, there is some really bright talent.’