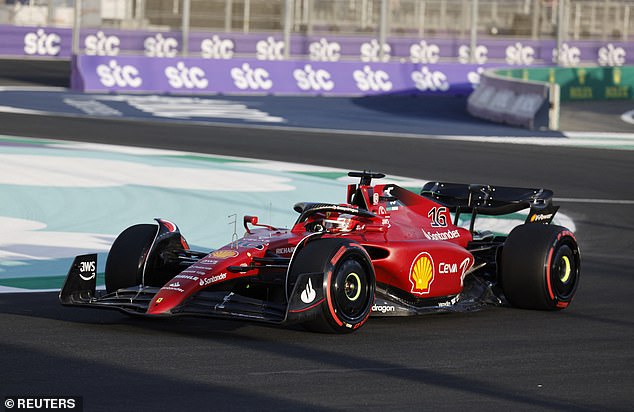 By Isabel Baldwin For Mailonline and Pa Sport

Charles Leclerc continued where he left off in Bahrain by posting the fastest time in first practice for the Saudi Arabian Grand Prix.

Five days after winning Formula One’s season opener, Leclerc was back on track and back at the top of the time charts for both first and second practice.

Leclerc clocked a 1:30.074 and pipped world champion Max Verstappen at 1:30.213. The Monegasque beat the Red Bull driver to pole position in Bahrain last weekend before securing victory in the first race of the season as Verstappen was forced to retire late on.

The other Red Bull was fourth fastest as Sergio Perez went around in 1:30.360.

The sport was last in Saudi Arabia only in December for the penultimate round of Hamilton’s titanic championship duel with Verstappen.

The seven-time champion came up trumps that day to take the title race to the wire but was off the pace this time round.

Mercedes have looked behind the eight ball since the first testing session in Barcelona and their struggles continued on Thursday as Lewis Hamilton finished only fifth, although he was not too far back, clocking a 1:30.513 ahead of team-mate George Russell at 1:30.664.

Hamilton could only finish fifth in qualifying for the Bahrain Grand Prix last week and claimed a flattering third place only due to Red Bull’s two late retirements.

Lando Norris comfortably outperformed the other McLaren with the seventh fastest time in second practice while Daniel Ricciardo was down in 15th.