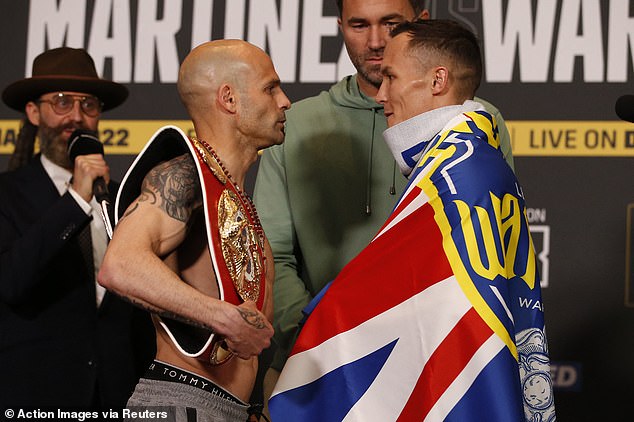 Josh Warrington will look to regain the IBF featherweight strap he vacated last year as he takes on veteran Kiko Martinez, who he already holds a win over, tonight.

‘The Leeds Warrior’, undefeated at the time, gave up his strap in search of an eagerly-anticipated bout against then WBA champion Xu Can, with the IBF instead ordering a bout against Kid Galahad, who he’d previously beaten.

Galahad went on to win the vacant title with victory over Jazza Dickens last year, but his reign as champion lasted just three months before he fell to a shock defeat to Martinez.

Warrington meanwhile suffered a shock loss of his own to the previously unknown quantity Mauricio Lara, who wiped out the Yorkshireman in their February bout, before their rematch seven months later ended in a technical draw following an accidental clash of heads.

Warrington is determined to share the ring with Lara for a third time, but beforehand comes a golden opportunity to regain his status as a world champion in a featherweight division currently thriving both domestically and around the world.

With the eagerly-awaited spectacle swiftly approaching, Sportsmail takes you through everything you need to know.

Warrington already holds a win over Martinez, defeating the Spaniard on points back in 2017

When is Kiko Martinez vs Josh Warrington?

The clash between Martinez and Warrington takes place tonight at the First Direct Arena, Leeds.

The pair are expected to walk to the ring at around 10pm for those in the UK, though that will of course depend on results beforehand.

There is also plenty of action on the undercard, with Maxi Hughes and Ryan Walsh coming together for the IBO lightweight title, while Ebanie Bridges fights Maria Cecillia Roman for the IBF bantamweight title.

How to watch the fight

The fight, which will be a 12-round contest, will be broadcast live on DAZN.

It will be available to stream in over 200 countries across the globe, with Australia and New Zealand the notable exceptions.

Customers will be able to stream the fight via the app on their television, console, mobile, tablet or computer device.

Sportsmail will also be covering the fight live, so you can keep up-to-date with us.

Martinez vs Warrington: The key stats

The pair have enjoyed an amicable build-up throughout fight week but, despite the prevalent language barrier, exchanged words as they came face-to-face for the final time before fight night at Friday’s weigh-in.

Explaining what was said, Warrington, donning a Leeds United scarf, said: ‘I was telling him, listen, there’s no way he’s going to win. He’s not going to win.

Martinez, on the other hand, insists he’ll shock the world again.

‘The focus and ambition for me is to retain my title and still be world champion,’ Martinez told Sportsmail. ‘But it’s not just winning it.

‘I’ve got this objective in front of me, coming back to Leeds, where last time I lost. So when they produce a film about me, about my history, I can say that I did it here. I came here and I retained my title.’

‘It’s been a really positive camp,’ he continued. ‘From the first day we’ve had no injuries. We’ve managed to get some great sparring: we’ve had Lee Selby and some other really good pros.

‘I’ve been surrounded by my family and coaches, so I’m just really focused and ready. There will be no excuses, I’m totally ready.’

Martinez vs Warrington: The odds

Though Warrington’s last win came over two years ago in 2019, it’s the former world champion who is the favourite among the bookies to emerge victorious on March 26.

*Odds as per Betfair and correct at the time of publication.

Sign up here to watch Sunday’s fight exclusively on DAZN