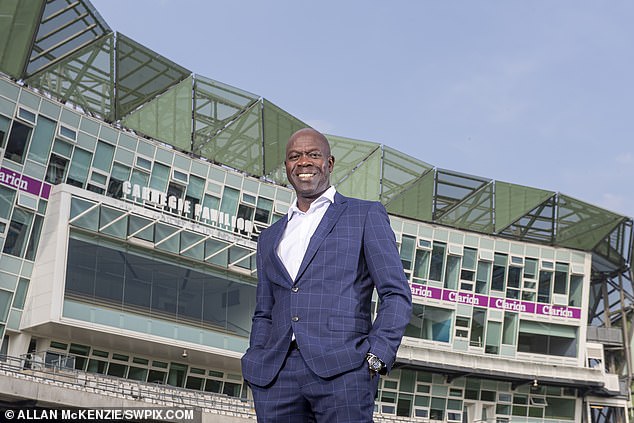 Ottis Gibson appears certain of one thing as he plots a County Championship title challenge by Yorkshire this summer: Gary Ballance should play a part in it.

While casting an eye over a practice match at a sun-drenched Bradford Park Avenue, Yorkshire’s new head coach switches talk of the crisis club’s grubby past beyond the threat of a points deduction to brighter visions of the future.

The 32-year-old Ballance is on a break after admitting using racist language towards former team-mate Azeem Rafiq and could yet be charged as part of a Cricket Discipline Commission investigation.

Gibson, having held a meeting with Ballance at Headingley on Wednesday that lasted more than hour, wants him back in the fold.

‘He is struggling at the minute mentally with everything that’s going on and the fact that the ECB are still doing an investigation. We don’t know what the findings of that might be, and he doesn’t feel ready to come back but he assures me he is still very keen to continue his career at Yorkshire,’ Gibson says.

‘Gary Ballance in any team in the County Championship makes that team better. We will support him as best as we can and hope that he gets through what he’s going through and comes back as soon as he can. He is an asset.

‘I’ve worked with Gary in the England set-up. He’s a lovely, bubbly guy, a very happy guy generally and I was surprised when I heard about some of the things because that’s not the guy that I knew in the England dressing room. I told him that.’

Is there a fear he might lose the experienced left-handed batter to a call made over his head? ‘If the ECB ban him then we would have to deal with that, but if they don’t, I would like to think that the club would allow him to continue because he’s done his time,’ Gibson continues.

‘I’d like to think we could get him re-integrated as soon as possible. That would be my hope.’ Gibson, 53, has discussed goals for his debut season with the squad and they include winning the Division One title. Yorkshire’s ambitions, however, could yet be handicapped and Gibson has called for any sanction over the historic mishandling of racism to be applied before the domestic season begins next week.

‘You don’t want to get halfway through, or part way through this season, and then get told. Before a ball is bowled, you can make allowances for it,’ he says. ‘One of the things I keep saying to the players is a bit of corporate speak: control the controllables. It’s relevant because they can’t do anything about what the ECB might or might not say. ‘What are their jobs? They’re cricketers. So they must turn up and be the best cricketers they can be in the circumstances.’

Gibson, Yorkshire’s first non-white head coach, says he hopes people see his CV first rather than the colour of his skin

Similarly, he does not want Thursday’s emergency general meeting — arranged for members to approve governance reforms at the club, including the voting in of chair Lord Patel — to prove a distraction before Yorkshire’s first fixture against Gloucestershire on April 14. Easier said than done, perhaps.

Devoid of sponsors in the aftermath of the Rafiq affair, the club is running on revenue generated by strong advanced ticket sales for international matches against New Zealand and South Africa this summer — fixtures the ECB say they will lose if conditions are not met by the end of this week. That includes paying wages.

As Yorkshire’s first non-white head coach, Gibson is a unifying figurehead as the club look to develop a more diverse and welcoming environment. Few in the world game can match the range of tough cultural experiences his cricket career has delivered: as a player he spent six seasons immediately after apartheid in South Africa; as head coach of the Proteas between 2017-19 he had to accept the selection constraints of transformation; he has worked in Bangladesh and Pakistan; and has called England ‘home’ for a quarter of a century.

He says: ‘I hope the CV is what people see first. Where I’ve been and what I’ve done rather than the colour of my skin. I’ve been the head coach of two international teams, twice England bowling coach and Bangladesh bowling coach.’

That did not stop him taking the responsibility of leading conversations on racism on the pre-season tour of Dubai. ‘With what has gone on here, I’ve tried to help guys understand. A joke is funny when it’s not on you. We want people to understand the importance of language and we are treating each other as equals.’

Despite debts of £20million, money has been set aside for overseas signings. A bold move for Babar Azam failed but an alternative top batsman remains on managing director Darren Gough’s wish list. Pakistan fast bowler Haris Rauf is available for the first four Vitality Blast matches — coinciding with a period when supporters will see white-ball king Adil Rashid for the first time in 2022.

Add a sprinkling of Joe Root, Jonny Bairstow and Dawid Malan to a core of talented up-and-comers and Gibson can’t be faulted when he concludes: ‘We’re not here to make up the numbers.’