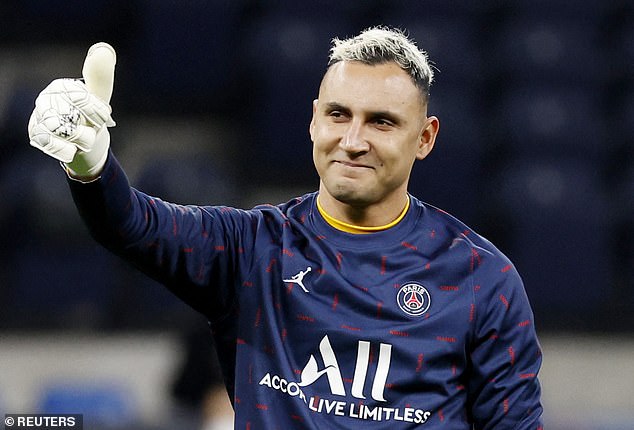 Kind-hearted PSG goalkeeper Keylor Navas welcomes THIRTY Ukrainian refugees into his Paris mansion and buys beds for them to stay in his home theatre, as his wife appeals for donations on social media amid Russia’s invasion

PSG goalkeeper Keylor Navas has welcomed 30 Ukrainian refugees into his Paris-based mansion amid Russia’s ongoing invasion of the country.

The 35-year-old and his wife, Andrea Salas, have bought 30 beds and placed the refugees in his home theatre.

His wife is also helping prepare food and the couple have provided clothes for their guests, according to Sport.

The Costa Rican and his wife, Andrea (left), have also provided clothes for their guests

The Spanish outlet reported that Navas discovered that ‘the association of gypsies from Gracia, Barcelona’ had travelled to Krakow to bring food and take in refugees and offered to help, welcoming 30 into his home.

Andrea also took to social media to appeal to people to offer their help to Ukrainians who have been affected by the conflict in their homeland.

Alongside the photo, she wrote: ‘Hands that give, will never be empty.

‘On Tuesday, Ukrainian families will be arriving in Valencia welcomed and brought with much love by @noguerajavi, his wife Isis, his nova vida team, @fundaciontiemposdeesperanza, priests, people moved by their hearts in the face of this chaos that they are living.

‘And I wanted to share with you that through Amazon.es we can help these children, some with their mother, others not, young people alone, with just their clothes, which was the only thing they could take, we can contribute whatever non-perishable food , clothes, personal hygiene items, etc.

‘I share the information! So that they can feel love in the midst of so much pain.’

The Costa Rican shotstopper is currently on international duty for three games of the CONCACAF World Cup qualifiers for Qatar.

Costa Rica moved up to fourth in the standings with a 1-0 win over leaders Canada on Friday.

They will face El Salvador and the United States in their final two games and hope they can remain fourth to secure a play-off.