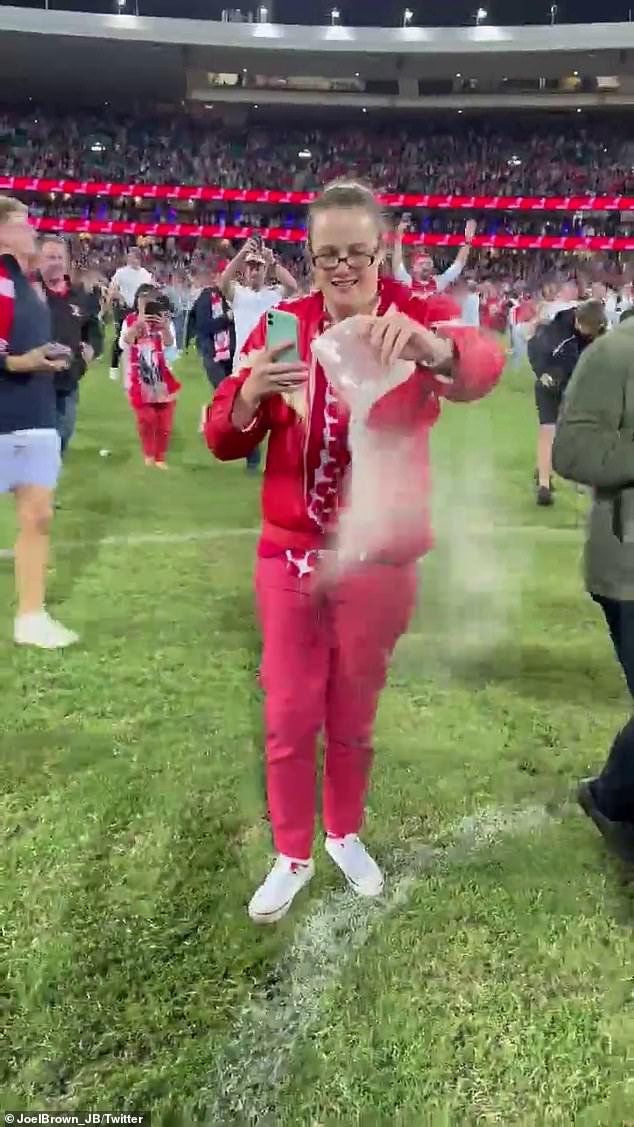 Sydney Swans fanatics scatter their grandmother’s ASHES on the SCG in the middle of wild scenes in the aftermath of Buddy Franklin’s 1,000th AFL goal

Lance ‘Buddy’ Franklin wasn’t the only one who was immortalised on Friday night.

As over 30,000 Swans flooded onto the SCG to celebrate Franklin’s 1,000th AFL goal, siblings Joel and Krystal Clayton seized the opportunity to honour their late grandmother and scatter her ashes on the hallowed turf in the centre square.

While most of the fans rushing onto the field had eyes only for Buddy, Krystal broke through the pack and made a beeline for the centre square.

Her brother Joel said it was a strategy to ensure they could honour their nan Edna Dixon’s wishes to have her ashes scattered at the SCG.

Krystal Clayton scatters her late grandmother’s ashes on the centre of the SCG. Edna Dixon was a huge Swans supporter and it was her wish to have her ashes scattered at the ground

‘She was originally a Victorian but moved to Gosford in the early ’80s. She supported Footscray but once she came up here she got involved with the Gosford Tigers and that led to her becoming a passionate Swans fan.

‘She always said she wanted to do a coin toss on the SCG but she never got a chance.

‘And she did say from time to time that she wanted some of her ashes scattered at the SCG so this was our chance to honour that.’

Geelong and Sydney players form a guard of honour for Lance Franklin after he achieved the massive milestone of 1,000 AFL goals in their round two clash

There was a bit of divine intervention at play as well. The siblings did not bring the ashes to the round one clash against GWS where Buddy had the opportunity to notch up the milestone, but would kick only one goal.

Joel said they were better prepared for the round two match and made sure they were ready when the big moment arrived.

‘I actually made my way down to where we used to have membership tickets, where we used to all sit, and I grabbed a bit of the SCG grass and put that in the bag that we had the ashes,’ he said.

‘From a footy standpoint it was such an occasion, such a big moment, but on a personal level for the family, it was quite emotional.

‘We never would have had another chance to do it.’