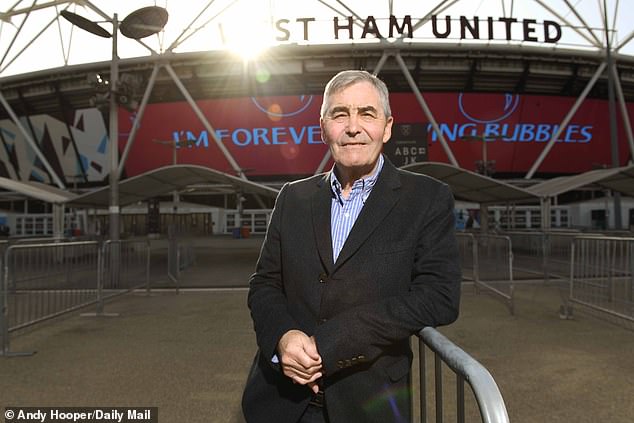 From Bobby Moore to Declan Rice, Tony Carr has worked with plenty of England players during his 48 years at West Ham.

Perhaps his greatest legacy will turn out to be persuading a 14-year-old Declan Rice to sign for the club having being released from Chelsea.

‘Declan is a throwback,’ says Carr proudly. ‘Clubs have to find ways of keeping young players grounded but you didn’t have that problem with Declan.

‘What I liked about him was he always looked you in the eye. If the coaches said something, he’d hold his gaze and show he understood.

‘The hunger came from within whereas other players might get carried away if they travelled with the first team or were given a few minutes in the first-team. ’

Carr remembers the day in 2014 when, as academy manager, he was tipped off about the young midfielder.

‘Our head of scouting Dave Hunt told me Chelsea were letting two players go that we should have a look at.

‘I didn’t know the names but when they turned up, I recognised them from academy games.

‘Declan had the pedigree. He could pass and move, was always available to receive the ball and knew his position. We liked him, took him and the rest is history.

‘The other lad was a right-back. We weren’t 100 per cent sure but we also offered to take him. It was a bonus for us that Declan would have a team-mate he knew.’

Some of Carr’s cubs ended up having stellar careers after moving from West Ham.

Rice could become the first player to cost a Premier League club more than £100million if he leaves at the end of the season. In November, he’ll be one of Gareth Southgate’s key players at the World Cup.

‘That passion to improve. Frank had it, Rio had it, Declan has it,’ said Carr. ‘He’d trained at Fulham after leaving Chelsea which would have been an easier commute from his home in Surrey but he liked the environment at West Ham.

‘Our attitude was serious but we also had fun. You can’t develop players if they feel intimidated and are frightened to make a mistake.

‘I see the same traits in Declan now that he had years ago but he’s also older and wiser. He plays with a bit more risk.

‘He doesn’t have to try and copy anyone to become a legend in his own right.

‘All the talk about him leaving West Ham, you don’t see it affect him on the pitch, being captain, communicating with the crowd.

‘I can’t predict what will happen. It’s a decision he has to make. West Ham could win the Europa League and be in the Champions League next season. Or does he move to a club that is regularly in it like Liverpool, Manchester City or Chelsea?’

Carr hails from Bow in east London and has a book out appropriately titled A Lifetime in Football at West Ham United. It includes interviews with the stars he helped make.

Moore was the first superstar he met at West Ham. ‘Bobby was shy,’ says Carr. ‘He had lots of acquaintances but only a few close friends.

‘He gave me a lift from training to Bow in his big Ford Zephyr, an automatic which was very rare in those days. When I got out, I hoped someone I knew might be around to see me being dropped off by England captain!

‘Bobby would ask our kit lady Mrs Gregg to wash his England shirt the day after he’d played at Wembley. Us apprentices would come back from lunch and see this white shirt hanging up in the dressing-room with a big red six on the back. It was magical.’

He joined first-team manager John Lyall in the dug-out for home games. Other unusual jobs cropped up too.

‘I remember travelling on the Nottingham Forest team coach when they played at Upton Park,’ he smiles. ‘Brian Clough wanted to know the shortcuts from the Bell Hotel in Epping so I had to sit behind the driver and navigate.

‘Cloughie sat opposite asking me about West Ham’s owners (the Cearns family). Near the ground, West Ham fans were banging the side of the coach. He suggested the driver replace the Nottingham Forest sign on the front to Notts County because “they would leave us alone then”.’

The most awkward time for Carr came in 1994 when two of his colleagues Billy Bonds and Harry Redknapp fell out – a rift that still hasn’t been mended.

Redknapp was Bonds’ assistant when the board asked him to be manager and offered Bonds a different job “upstairs”.

‘Bill’s exact words were “You can stuff it up your arse,” recalls Carr. ‘It was very sad but I don’t think Harry engineered it. He wanted to be manager but not under those circumstances. Trevor Brooking was the one who might have been able to broker peace but he was Bonzo’s (Bonds) big friend and he took his side.’

Carr also fell victim to football politics in the end. Karren Brady removed him as academy manager and changed his job description. Financial officer Andy Mollett was then tasked with sorting out redundancy in 2016.

‘I asked Mollett what the package was and he told me three months’ notice and minimal payment. That was it,’ writes Carr in the book. ‘I was upset and, after 43 years unbroken service, I thought it could have been handled better.’

Nowadays, Carr supports West Ham as a paying customer at the London Stadium. He’s heard there is a picture of him in a lounge but he’s never been invited in to see it for himself. He gets a better welcome at youth games – their manager Kevin Keen is one of his old boys.

‘I still get excited when West Ham win,’ says Carr. ‘I know a few of the players. I remember (defender) Ben Johnson coming to the academy from around the age of eight.

l Tony Carr A Lifetime in Football at West Ham United is published on April 7 by Icon Books and is £20 in hardback.