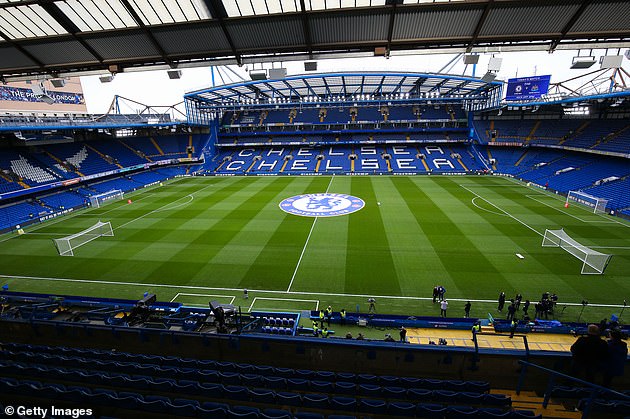 Chelsea’s four shortlisted bidders to buy the club must provide detailed, costed plans for how they intend to expand Stamford Bridge… as Mason Mount admits ongoing Blues uncertainty is a ‘concern’

By Rob Draper and Nick Harris for The Mail on Sunday

The four shortlisted bidders to buy Chelsea from Roman Abramovich will be expected to provide detailed, costed plans for how they intend to expand Stamford Bridge, with two of the bidding groups up against the clock to scale down their holdings in other top-flight clubs.

The ‘Team Boehly’ bid, led by the US billionaire and part owner of baseball and NBA teams Todd Boehly, and the bid from the American Ricketts family, who own the Chicago Cubs, do not come encumbered with any ownership conflicts of interest.

But the bid led by Sir Martin Broughton, former chairman of British Airways, involves US tycoons David Blitzer and Josh Harris, who each own 18 per cent of Crystal Palace.

To buy Chelsea, those shares would need to be lowered below 10 per cent quickly.

A bid from Stephen Pagliuca, co-owner of the Boston Celtics basketball team and 55 per cent shareholder in Serie A side Atalanta, would need him to considerably downsize his holding in the Italian club.

The New York-based merchant bank Raine is overseeing the sale of a club owned by Abramovich since 2003, but which is now up for grabs after the Russian was sanctioned by the British Government for ties to his country’s president Vladimir Putin.

The bidders now expect their financing proposals to be put under greater scrutiny, alongside plans for the stadium.

As The Mail on Sunday reported last week, the Ricketts family feel they have an edge, having already consulted extensively with key figures in Abramovich’s aborted stadium redevelopment.

But they still have a PR struggle on their hands after family figurehead Joe Ricketts — who would not be involved at Chelsea — expressed anti-Muslim sentiment in emails sent between 2009 and 2013 that surfaced in 2019.

Meanwhile one of Chelsea’s key players, Mason Mount, has conceded the ongoing uncertainty at Chelsea is a concern.

But he insists that six consecutive wins demonstrate the squad are able to put the issue to one side as they prepare for the finale to the season. ‘I’ve been at the club since I was six and something like this has not happened before so it can be a concern,’ he said.

‘At the beginning, and even now, we don’t really know where it’s going and what’s happening the next day.

‘So it’s difficult, but we focus on our football and what we can do is try and win as many games as we can. Obviously I’m away with England so that stuff is parked and I’m focusing on England duty and what I can do while I’m away this week.

‘Then, when I go back to Chelsea next week, I’m sure we will be informed about what’s going on because I haven’t heard anything.

‘It can sometimes be hard to focus on football when a lot of things are going on around you but it has made it easier that there’s a game coming up, so we can’t look at what’s going on away from the football pitch, we focus on the game and on the three points and try to win.

‘The last six games we managed to do that and hopefully that can continue. You don’t know what’s going on from day to day, so to focus on football and what we can have an effect on is what we do.’