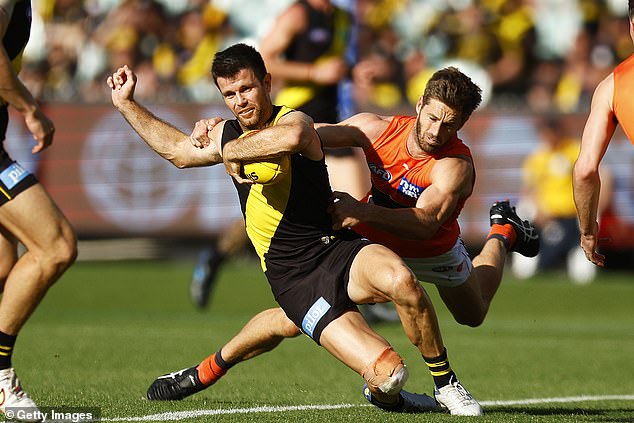 No Dusty, no problem: Richmond Tigers beat GWS Giants despite absence of Martin, Prestia, Grimes and Riewoldt in impressive turnaround after loss to Carlton

Richmond have overcome the loss of several key players to beat GWS by 36 points in their first MCG clash since the Tigers’ 2019 AFL premiership.

Half-backs Jayden Short and Nathan Broad were prominent and former captain Trent Cotchin also starred as the Tigers led for most of the game to win 16.13 (109) to 10.13 (73).

Phil Davis (hamstring) and Jake Lloyd (shoulder) were also hurt as the Giants fell to a 0-2 start to the season, while Richmond rebounded from last week’s loss to Carlton.

Noah Balta kicked four goals for the Tigers, while GWS onballer Callan Ward had 28 disposals in his 250th game and teammate Tom Green had a game-high 34 possessions.

Trent Cotchin starred for the Tigers as they overcame the loss of stars Dustin Martin, Dion Prestia, Dylan Grimes and Jack Riewoldt to triumph over the Giants

The last time these two teams played at the MCG, Richmond restricted GWS to three goals and mauled them by 89 points for the 2019 flag.

Some of the most important players from the 2017-20 premiership three-peat were missing on Sunday – Dustin Martin is taking time off for personal reasons, while fellow front liners Dion Prestia, co-captain Dylan Grimes and Jack Riewoldt are all injured.

But the Tigers played with much more system and poise than GWS.

Phil Davis injured his hamstring in a blow for GWS, who also lost Jake Lloyd with a shoulder complaint. The Giants were in it until Richmond took the game away early in the second term

Despite ideal conditions, the teams managed only one goal apiece in a scrappy opening where field umpire Ray Chamberlain also struggled.

Chamberlain was ill on the field, but ran out the game.

Late in the first term, Lloyd and teammate Jake Riccardi collided on the wing and Lloyd was taken to hospital for X-rays on his shoulder.

After the Giants kicked the first goal of the second term to take the lead, the Tigers broke the game open.

Richmond speedster Shai Bolton sparked the surge with two goals and they kicked another two to lead by 20 points.

Liam Baker gets a handball away despite the attentions of a Giants defender. The win got the Tigers’ season back on track after Carlton came back late to put them away in round one

As GWS fought back, veteran key defender Phil Davis dived to chase down an opponent and ripped his left hamstring.

Davis immediately put his hand up as he lay on the ground, well aware he had suffered a serious injury.

GWS were still in with a chance when Josh Kelly kicked his third goal and reduced the margin to 20 points in the last term.

But a three-goal run sealed the win for the Tigers.