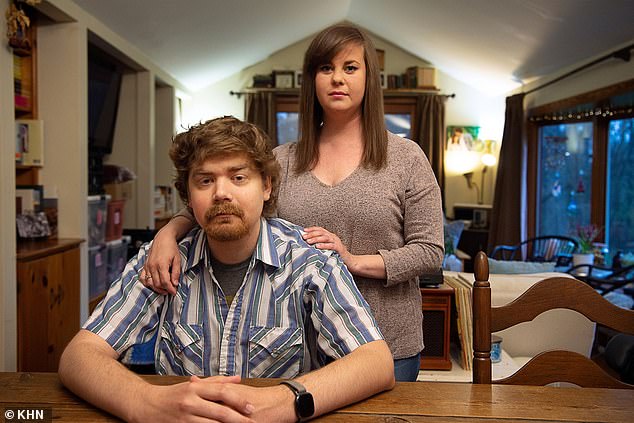 A North Carolina man was billed nearly a half-million dollars after receiving emergency medivac travel back home after he discovered he had leukemia while on vacation in late 2020.

Sean Deines, 32, received a $489,000 bill in the mail after he was transferred 1,468 miles through the air from Denver, Colorado, back home for treatment.

The Angel MedFlight he received from Aviation West Charters fell outside of his insurance network, and that combined with ground ambulance transportation once he arrived – which totaled around $70,000 – led to the large bill.

The exorbitant bill was eventually resolved, but proves to be an example of how opaqueness of America’s health care system can hurt patients, and cost them their life’s savings.

Sean Deines and his wife Rebeah (pictured) were hit with a bill totaling nearly $500,000 after he required emergency travel from Denver to North Carolina after a leukemia diagnosis

Deines and his wife, Rebekah, were visiting a relative in Wyoming when he suddenly fell ill, the Kaiser Family Foundation (KFF) reports.

He went to urgent care, and was referred to an emergency room. With local hospitals unable to treat him, he was airlifted to Denver, where he was admitted on November 28.

The helicopter flight from Wyoming to Colorado was not included in the massive bill he would later receive.

Doctors in Denver diagnosed him with acute lymphoblastic leukemia, and he was told he had a ‘through the roof’ white blood cell count.

Deines received initial treatment from doctors to stabilize his condition, before he and his wife decided it was best to receive treatment near his home in North Carolina.

This is where the trouble began. On November 30, the hospital submitted an application to Deines’ insurance, Blue Cross Blue Shield, to have the transfer approved.

Deinas said he couldn’t believe what was happening, as the ambulance and insurance company went back and forth on who was responsible for the bill

The company had not yet responded, and had only just received the application on December 1, the day the transfer took place.

He would spend 28 days in the hospital before being discharged. The hospital itself was in-network, but after he left the bills for the travel started to come in.

The flight ended up going through without prior approval, a break from regular norms.

The company told KFF it was ‘satisfied each step in the health insurance process and transported Sean to his long-term health care providers in good faith.’

On December 3, two days later, the company rejected the travel, saying that the facility in Denver was adequate enough for treatment even if it was across the country from his home.

He then received a $489,000 bill. Blue Cross sent him $72,000, enough to cover the ambulance rides for when he landed in North Carolina. Deines remained on the hook for the rest, though.

For Deines, who was unemployed and had lost his job as a bartender during the pandemic,  it was an unbelievable turn of events.

Blue Cross Blue Shield apologized for the situation, though in its initial ruling it did not deem it necessary for Deines to travel back home to receive his treatment, saying he should have stayed in Denver instead

‘The initial thought was ‘I can’t believe this is happening,’ said Deines.

Unable to pay the bill, it was eventually sent to collections.

Angel MedFlight, knowing Deines could not pay, argued to have Blue Cross cover the tab for the ride. The insurance company responded by telling Deines to return the $72,000 check.

The company then involved an independent evaluator, who also ruled in favor of Blue Cross, saying Deines should have stayed in Colorado despite living in North Carolina.

Deines bill was finally resolved when KFF got involved, with the companies coming to an agreement. He will not be held liable for any of the charges.

‘We apologize for putting the member in the middle of this complicated situation,’ a Blue Cross spokesperson told KFF.

‘Once North Carolina Blue engages in our formal inquiries about its refund request, the status of the funds will be resolved,’ a spokesperson for the ambulance company said.

‘One thing is certain, Sean will not have to pay for North Carolina’s wavering coverage decision.’