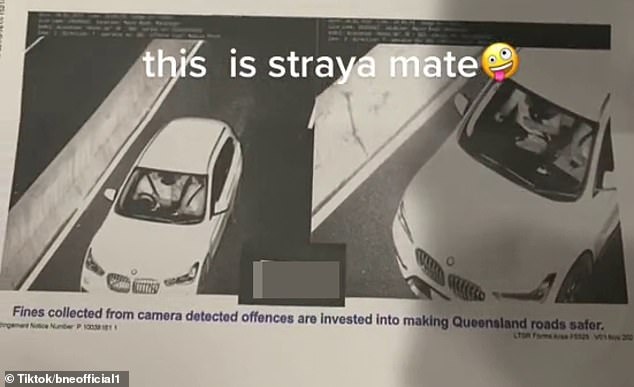 Driver is fined $1,033 for breaking a little-known road rule – can you spot his mistake?

A driver who was fined $1,033 for resting his phone on his lap while driving claims he didn’t know it was against the law.

The man shared a video of the fine and four demerit points he received after a Brisbane traffic camera caught him with his phone in January.

The fine reads his offence was ‘driver use mobile phone handheld/resting on body’ and shows a photo of the man with the phone on his lap.

A Queenslander was fined more than $1,000 for resting his phone on his lap while driving and claims he didn’t know it was against the law

‘It was a red light and I thought that would be ok. This is straya mate,’ he wrote.

Resting a mobile phone on your body while driving is illegal under Queensland road rules, even when the driver is not looking at or touching it.

‘To keep yourself and other road users safe your full attention is needed when driving,’ the Queensland Government website read.

‘It is illegal to hold a mobile phone in your hand or have it resting on any part of your body, such as your lap, when driving. This applies even if you’re stopped in traffic.

‘The phone does not need to be turned on or in use for it to be an offence.’

Commenters were divided by the fine with some shocked, while others insisted it was a well-known rule.

‘Phone on lap is a fine that’s mad,’ one wrote.

‘Using your phone.. you know the rules then cry when caught,’ another added.

The man received a $1,033 fine for resting his mobile phone on his lap in Brisbane, Queensland

FINES FOR USING A PHONE IN EACH STATE

Four demerit points and a $545 fine