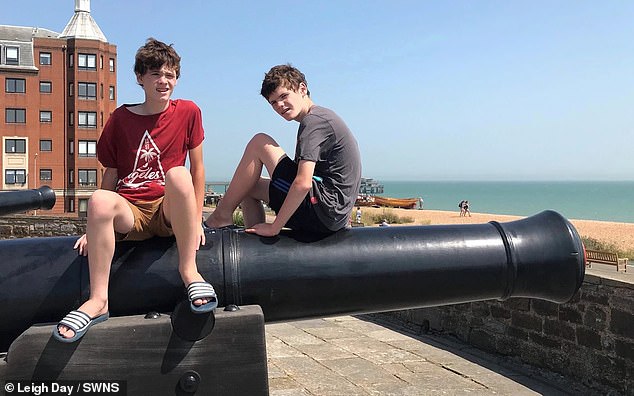 A special needs school which repeatedly strapped two autistic students into chairs to restrict their movements has apologised after a court ruled it had breached their human rights.

Their parents have been offered more than £80,000 compensation after a civil court case brought against Kent County Council.

Twins Samuel and Jacob Montague, who are both severely autistic and non-verbal, were strapped to chairs repeatedly by staff at Five Acre Wood school

The twins, who are both severely autistic and non-verbal, started at the school in 2009 aged four, with the intention that they would attend until age 19. They are now both 17.

But their parents Annie and Mark pulled them out in 2013 after realising staff were strapping the boys into chairs despite objections and protests.

Now Annie and Mark are calling for changes to the law to make it clearer the restraints should not be used against children like Samuel and Jacob.

In a statement issued after the settlement, they said: ‘Children with special educational needs should be protected, not strapped into chairs.

‘It has been a long, difficult process, but it has been our privilege to be the voice for Samuel and Jacob.

‘They, and other children with autism or learning disabilities, deserve the full protection of the law.

‘Local authorities should be on their side, empowering their lives, instead of using restrictive practices like restraints that can cause trauma and harm.

‘Now that the case is over, and Samuel and Jacob are safe and thriving, we look forward to campaigning to stop the use of restraints against children with special educational needs.’

The first public incident took place in 2010, when the boys were wheeled out at a school concert strapped into the ‘Hardrock’ chairs.

The chairs restrain movement through a number of straps that go around legs, arms, and shoulders.

When their parents protested, they were told the mechanical restraint chairs were the only way the boys could participate in the concert and their use was a one-off.

Despite this, the couple became concerned that Samuel and Jacob were being routinely restrained while at the school.

And in June 2011, a clinical psychologist visited and witnessed one of the boys strapped into the Hardrock chairs in the classroom.

On one occasion the boys’ mother and their carer attended a school sports day where other children were outside and running around.

But Jacob was strapped into the chair and visibly distressed.

The boys’ autism means they interpret the world through touch and movement, so the use of the chairs completely undermined their human rights, Annie and Mark argued.

After they took Samuel and Jacob out of the school, they home-schooled them and the boys have since flourished.

The couple brought a civil case under the Human Rights Act against the council.

They argued the restraints had been used unlawfully as the school failed to consider less restrictive options and failed to put in place a plan to reduce the use of restraints.

The school admitted a raft of failings and admitted the use of straps and trays on the specialist chairs could restrict movement and amount to mechanical restraint.

They admitted the restraint took place while the boys were at school and without their parents’ agreement, which was a breach of the school’s policy and national guidance.

Annie and Mark added: ‘We only sought legal redress after many years trying to get answers from Kent County Council.

‘This case was never about financial compensation; it was about trying to stop these practices happening to other children up and down the country.’

Solicitor Catriona Rubens, who represented the Montague family, said: ‘Samuel and Jacob were active, sensory seeking children who, because of their autism, interpret the world through movement and touch.

‘It is our view that, by strapping them into mechanical restraint chairs at school, the local authority breached their human rights and failed to deliver any therapeutic benefit to the twins.

‘We welcome Kent County Council’s sincere apology and recognition that it failed Samuel and Jacob in this case.

‘The success of Samuel and Jacob’s case is a testament to the many years their parents spent fighting to get answers from the local authority about the use of restraint against their sons.’

A spokesman for the council said in a statement that it ‘sincerely apologises for any harm, distress and/or pain and suffering that were caused to Samuel and Jacob and to their parents as a result of these failures’.