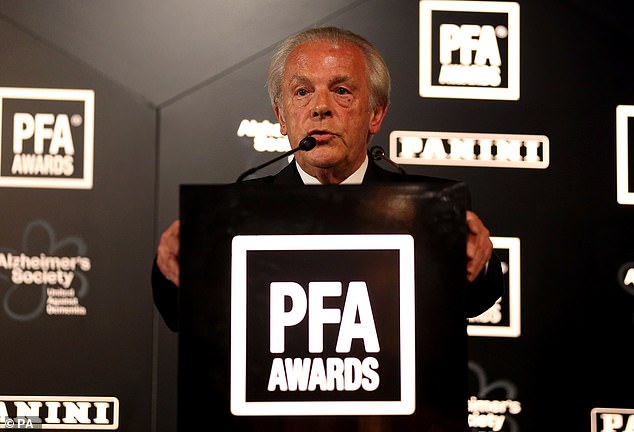 PFA charity’s new policy on donations to dementia sufferers is branded a ‘slap in the face’ as anyone with assets of over £23,250 is denied financial help despite union’s £60m in the bank… as two Gordon Taylor allies depart after over 50 years’ service

Bobby Barnes and John Bramhall will both depart following a combined tally of more than 50 years at the organisation.

However, the news came on the same day it emerged the PFA’s charity arm – currently subject to a Charity Commission inquiry – had published a new policy for making donations to dementia sufferers which campaigners immediately branded ‘a slap in the face’.

The PFA Charity – with more than £60m sloshing in its coffers – outlined its position on those suffering from dementia over a relatively brief two-and-a-half pages.

They say that anyone with assets of more than £23,250 will not be entitled to financial support and point those suffering from the disease to social services, in a move that is known to have infuriated senior officials at the PFA, which operates as a separate body.

The charity, which paid Taylor’s salary, is awaiting the findings of the inquiry, which are expected to make for devastating reading.

Its report has been delayed by a staggering legal challenge by PFA charity trustees revealed by the Mail on Sunday. Molango declined to take his position as a trustee until the report is published.

The dementia policy will trigger further questions. Crucially, according to those who want more to be done for ex-pros and their families following diagnosis – it makes no mention of any assistance for respite or long-term care costs, although it does say those living in a care home can apply for help.

Former West Ham winger Barnes, 59, was deputy chief executive and a long-time apologist for Taylor, who left last summer following an astonishingly lucrative reign that saw him depart with a final pay check of £3.1m.

Barnes’s exit, after 22 years with the union, was announced via a short, quoteless statement on the PFA website.

Insiders insist his stepping down was ‘amicable’. It is understood it was made clear to him that the writing was on the wall. Barnes will retain his role as European President and Global Board member of global players’ union FIFPRO.

Bramhall, also deputy chief executive, goes after 30 years. The former lower league centre-half will remain at the PFA for the coming weeks.

While that news may be welcomed by those seeking reform, the policy has caused outrage.

It states that sufferers can ask for home improvements and help with domestic bills and says its £23,250 limit does not include the value of a beneficiary’s home unless it is vacant and claim ‘we will do everything we can to help’.

But its content has left PFA officials and campaigners staggered.

‘It’s a disgrace,’ said John Stiles, whose father – World Cup winner Nobby – passed away after suffering with the disease in 2020.

‘There are players in care homes whose dementia was caused by heading a ball who are not getting any help and there is £60m in the bank.

‘They brag that they’ll get you a new door if you keep tripping up. If it wasn’t so tragic it would be comical. It is unbelievably crass. There’s no criteria set for help.

‘Basically, nothing has changed. This is the same as it was under Taylor. It’s a real kick in the teeth.’