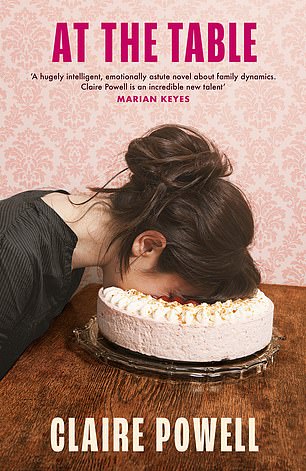 By Wendy Holden for the Daily Mail

The Maguires of South London all have problems. Parents Linda and Gerry have just separated after 35 years, glamorous daughter Nicole is an alcoholic, and teacher son Jamie is drifting into a disastrous posh marriage.

Their interwoven stories are relayed through the brilliantly simple device of food and drink and the way we use them.

Powell is a fantastic writer who exercises perfect control. Every detail is forensically, sympathetically observed, and while there’s a lot that’s tragic, it’s often very close to comedy.

But then Finn fails to turn up at the altar. How could she have got him so wrong?

We slip back and forth between the story of the romance and the eponymous six days before the police declare Finn a missing person.

Best friend Hannah provides moral support as distraught Gemma follows every clue. The twist at the end is dramatic.

A well-paced, good-natured and emotional novel whose strength is its depiction of modern urban living.

EXACTLY WHAT YOU MEAN

Such an incredibly clever idea this, a set of interlinked stories in which people who appear in one turn up in another, often in a different place and years afterwards, with character and consequence forming the links. Betrayal is a major theme, and there’s a regretful, wistful atmosphere that’s compelling.

Many tales are set on Guernsey, which forms the backdrop to a boy’s cruel act; the same boy’s brother appears in a later story, in love with a reckless rich girl.

My favourite sequence was about Flora and Jonathan. His adultery with his secretary (who features in another set of tales) results in a terrible but brilliant revenge.