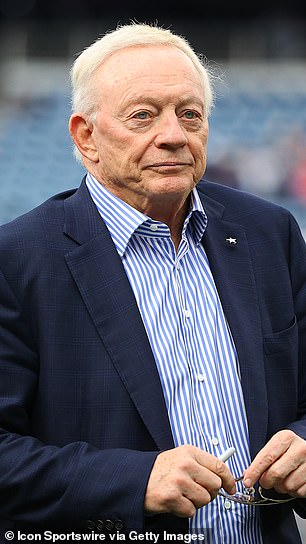 Dallas Cowboys owner Jerry Jones has already paid nearly $3 million to the woman who filed a paternity suit against him on March 3, including a $70,000 Range Rover for her $33,000 ‘Sweet 16’ party nine years ago, according to an Arkansas attorney who says he facilitated the transactions.

‘On numerous occasions I have made payments on behalf of Mr. Jones to Cindy and Alex Davis,’ Jack said in a statement, referencing the plaintiff and her mother, Cynthia Davis Spencer.

Jones, a 79-year-old married father of three, has not confirmed or denied that he is Davis’s father. However, Davis’s 16th birthday party was featured on the reality TV show ‘Big Rich Texas,’ which included footage of her receiving a new, white Range Rover.

Jones’s attorneys accused Davis of extortion while moving to have her lawsuit dismissed in a filing earlier this week.

Davis alleged in her lawsuit that when she was 1, Jones agreed to pay her mother $375,000 in exchange for their silence about Davis’s parentage. The suit claims Jones organized two trust funds for Davis in Arkansas, where Davis Spencer was living and working for American Airlines at the time. Jones and Spencer Davis allegedly had an affair in the mid-1990s.

Dallas Cowboys owner Jerry Jones (left) has already paid nearly $3 million to the woman who filed a paternity suit against him on March 3, including a $70,000 Range Rover for her $33,000 ‘Sweet 16’ party nine years ago, according to an Arkansas attorney who says he facilitated the transactions. Jones’s alleged payments to the plaintiff, 25-year-old Alexandra Davis (right, alongside mother Cynthia at her 16th birthday party), also included full tuition at Southern Methodist University, Little Rock attorney Don Jack told ESPN

Alexandra Davis was seen getting a white Range Rover for her ‘Sweet 16’ party on a reality show called ‘Big Rich Texas,’ which supports Arkansas attorney Don Jack’s claim that the car was bought for the woman, now 25, by Dallas Cowboys owner Jerry Jones

Jones, a 79-year-old married father of three, has not confirmed or denied that he is Davis’s father. However, Davis’s 16th birthday party (right, alongside her mother, Cynthia) was featured on the reality TV show ‘Big Rich Texas’

Jack, a longtime friend of Jones, confirmed that he reached a deal on the billionaire’s behalf in 1995 to pay Spencer Davis $375,000, adding that the monthly child support payments ‘ultimately totaled over $2 million.’

In the March 3 filing, Davis asked the Dallas County court to rule that Jones’s agreement with her mother was unenforceable in Texas and to confirm that he is, in fact, her father. Her attorney, Andrew A. Bergman, has maintained that Davis is not seeking money, but instead wants to be recognized as his daughter after being ignored for years.

However, Jack claims that Davis and her mother sought $20 million from Jones in a letter that she shared with the Arkansas attorney at a Dallas steakhouse ‘three or four’ years ago.

‘In that meeting, Alex read to me a personal letter she had drafted to Jerry Jones in which she expressed her dissatisfaction with what she had received and sought $20 million,’ Jack told ESPN. ‘She stated that if that amount was paid, she would not bother Mr. Jones again and would keep their relationship confidential.’

The letter has not been reviewed or otherwise corroborated by ESPN.

‘Let’s see the letter,’ Bergman said to ESPN on Thursday. ‘And let’s see the evidence that more money was paid beyond those agreements. And I would ask why? Is Jerry saying that money is a substitute for being a father? Do the millions make him a good father and do they make my client an extortionist? Don’t forget the money was contingent on her being silent.’

Alexandra Davis (right, at her Sweet 16 party nine years ago) is suing Jones for paternity

Jones spokesman Jim Wilkinson declined to comment when asked by ESPN if the Cowboys owner is Davis’s father. Both Jack and Wilkinson also declined to release a copy of the agreement, which they say has resulted in $1.3 million in payments to Davis and her mother over the last 25 years and calls for future payments when she turns 26 and 28.

Davis, who works as an aide to US congressman Ronny Jackson (Republican-Texas), has declined to comment publicly on the matter.

Jack claims that Davis and Spencer Davis would occasionally ask for more money from Jones, which is why the Cowboys owner exceeded the amount he agreed to pay in the trust agreement by nearly $1 million.

‘The facts clearly show that millions of dollars have been paid,’ Wilkinson said, ‘and on top of that, a $20 million shakedown attempt was made. I think this speaks for itself as to the motives.’

Wilkinson also accused Bergman of demanding money for Davis to settle the case.

‘If you want this just to go away, it’s going to cost you Zeke or Dak money,’ Bergman allegedly told Jones’s attorney Levi A. McCathern, Wilkinson said to ESPN.

Jones and his wife of 59 years, Eugenia

‘Zeke and Dak’ refers to Cowboys running back Ezekiel Elliott and quarterback Dak Prescott, who are the team’s two highest-paid players.

‘There was never a discussion about a nonmonetary resolution,’ Wilkinson told ESPN. ‘Money was always part of the deal.’

Bergman denied the claim to ESPN.

‘It is absolutely false — and they know it — that I ever demanded money on behalf of Alex,’ Bergman said. ‘They said, ‘What does she want?’ And I said she wants to establish parentage, and Jerry can do it cooperatively or not.

‘Levi said Jerry’s not going to do that because of Mama Gene,’ Bergman continued, referencing Jones’s wife of 59 years, Eugenia. ‘Levi said Jerry said Alex will never be part of our family in a picture when we raise money for the Salvation Army. That’s the truth.’

Wilkinson denied that McCathern ever said that to Bergman.

‘Now they’ve changed their story yet again,’ Wilkinson said. ‘First it wasn’t about money. Now it is about money. And now they are on three sides of a two-sided issue. They are all over the map here. Pick a story and stick with it. This is clownish.’

Davis reportedly works as an aide for Ronny Jackson, a Republican congressman from Texas