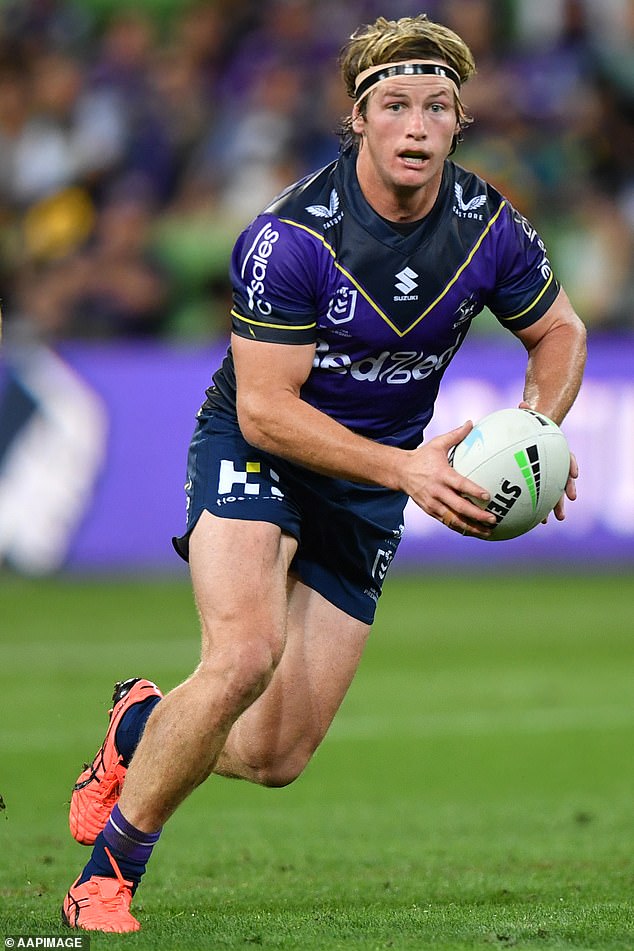 Melbourne hooker Harry Grant has rejected a monster four-year deal valued at $4.4million from the Dolphins to re-sign with the Storm until 2025, with highly sought-after halfback Jahrome Hughes also committing to the club until 2026.

Grant, 24, has taken less money to stay at AAMI Park, with his new contract believed to be worth just under $1million per year.

Hughes was reportedly in high demand from several clubs before deciding to stay put.

Their re-signings mean champion five-eighth Cameron Munster will almost certainly have to leave Melbourne due to salary cap pressures.

He’s being hunted by the Dolphins, who have already signed his Storm teammates Felise Kaufusi and brothers Jesse and Kenny Bromwich.

Melbourne hooker Harry Grant has rejected a monster four-year deal valued at $4.4million from new NRL franchise the Dolphins to re-sign with the Storm until 2025

Grant has been joined in sticking with the Storm by halfback Jahrome Hughes (right), who is on board until 2026

The Storm also announced the extension of winger Xavier Coates’s contract, which will now see him through until 2026.

Elsewhere, a welfare clause in Reece Walsh’s contract with the Warriors could see the young gun return to the Broncos.

Off contract at the end of 2023, there are fears Walsh doesn’t want to relocate across the Tasman.

The playing group will soon be based in New Zealand after living in different parts of Australia in recent years due to the pandemic.

Locations have included Terrigal on the NSW central coast and currently Redcliffe in Queensland.

Warriors football chief Craig Hodges knows plenty of clubs will be keen to land Walsh, regarded as one of the hottest young prospects in the game.

‘The challenge for us will be keeping Reece,’ he told the Courier Mail.

‘He hasn’t lived in New Zealand, so that will be a big move for him, but what I do know is that he is extremely happy at the Warriors and he feels like his game is developing.

Speaking ahead of Walsh and the Warriors playing the Broncos this Saturday at Redcliffe, former roommate Pat Carrigan said the gun fullback would be welcome back with open arms at Red Hill.

‘He is a classy little player. You always knew he was going to be a freak in the game,’ the Brisbane lock said.

Suspended Knights forward Mitch Barnett is also set to be on the move, with the Warriors and Tigers reportedly interested in snapping him up.

Currently serving a six-week ban for his ugly elbow on Penrith’s Chris Smith, Barnett is close with Warriors coach Nathan Brown, who signed the enforcer when in charge of Newcastle in 2016.