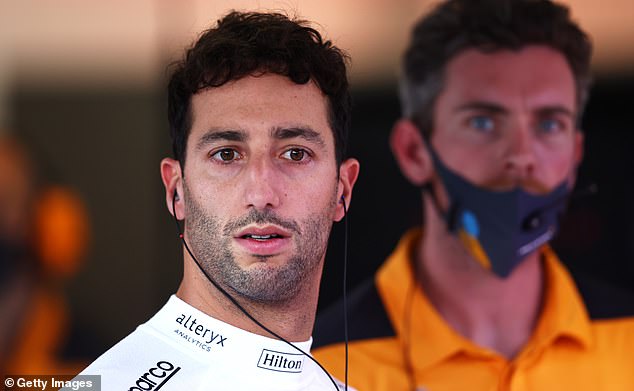 Red Bull boss Christian Horner has unloaded on Aussie F1 driver Daniel Ricciardo for leaving the team back in 2018, declaring he turned his back on a ‘stratospheric offer’ in what amounted to ‘spectacularly bad timing.’

Perth-born Ricciardo, 32, shocked the Formula One paddock by defecting to Renault in 2019, then switched to McLaren for the 2021 season and has struggled badly ever since.

Many insiders believe he is living in the shadow of his younger McLaren teammate Lando Norris.

Despite being the number two driver, at just 22 Norris is believed to earn more than Ricciardo’s reported $17million a year.

Red Bull boss Christian Horner has unloaded on Aussie F1 driver Daniel Ricciardo for leaving the team back in 2018, declaring he turned his back on a ‘stratospheric offer’

He then promoted Ricciardo to replace fellow Aussie Mark Webber before he joined forces with four-time world champion Sebastian Vettel at Red Bull in 2014.

Ricciardo unexpectedly left four years later in a move which dumbfounded Horner at the time.

‘We put offers in front of him that were stratospheric,’ he told News Corp.

‘But Daniel could see Max (Verstappen) in the ascendancy and he didn’t want to become the second driver.’

Horner added the timing couldn’t have been worse for Ricciardo, who thought the team’s Honda engine wouldn’t be competitive, but was proved wrong when the Japanese manufacturer solved teething problems to produce a top power unit.

Horner went onto state that Ricciardo is a ‘great driver with a big personality’ and that Red Bull were sad to see him jump ship.

The Australian Grand Prix will be staged at Albert Park on April 10.