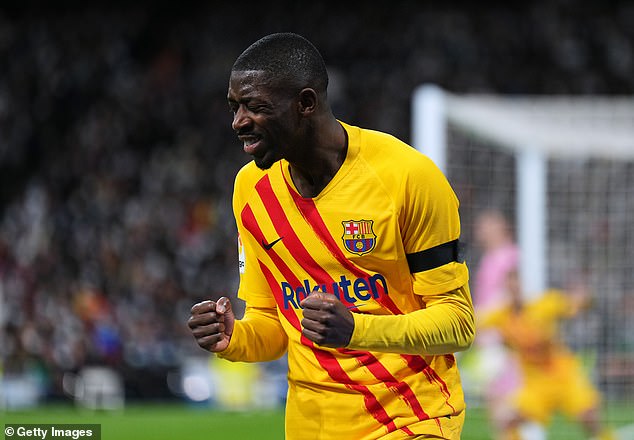 It’s currently a case of so near and yet so far for Ousmane Dembele at Barcelona. He is closer to those that run the club than he has been at anytime since he arrived.

But despite the goal celebrations with Xavi after he scored against Athletic last month, and the embrace with president Joan Laporta after Europa League victory over Galatasaray last week, his agent Moussa Sissoko is no closer to accepting the terms offered to his player at the end of last year.

Barcelona will hold talks with Dembele’s agent sooner rather than later because what happens with the 24-year-old French winger will have huge repercussions for what else they do in the market.

If they are sure Dembele is going to leave on June 30 when his contract ends, they will step up the attempt to sign Raphinha from Leeds.

If Dembele stays, that deal becomes far harder to do as much as the club are more interested in bringing in the Brazilian than they are keeping Wolves loanee Adama Traore.

The current state of flux has only been brought about by Dembele’s stunning revival on the pitch, something directly related to the simple fact that Xavi loves him.

If Barcelona are sure Dembele will leave in June, they will push to sign Raphinha (above)

He said as much in his presentation press conference but skeptics might have suspected that all that stuff about him being, potentially, the best in the world in his position was just fluff to get him to sign the bargain-bin contract renewal offered him. But no, as it turns out, he really is Dembele’s biggest fan.

Xavi appreciates that the player has two qualities that are impossible to coach: he is ambidextrous and he is a natural sprinter with the capacity to accelerate over short distances as impressively any player in the world.

The ambidextrousness is particularly rare. This is not a player who is ‘two-footed’ because he has worked on his weaker side. This is someone who has to think before taking a penalty because both feet would work just as well.

It’s the speed and ability go left or right that make him so difficult to deal with.

Xavi also believes he has a football brain – maybe not one that enables him to completely internalise all the mechanisms a Barca youth team player would but he is reachable with good instructions.

And physically, despite the apparent frailty he has shown since arriving, he is a ‘naturally’ fit player. He’s an athlete – albeit, one who may always have to take care of his hamstrings.

So they are all the positives. The negatives have been well-documented and possibly over-exaggerated too because there have been times when painting him as an airhead who turns up late for training and sits around eating pizza and playing video games have suited certain agendas.

Punctuality doesn’t appear to be his strength but then Xavi feels that was indulged because the club had no rules in place to deter players from turning up late. He was stunned when he took over and asked the players what was in the code of conduct, and they pretty much said: what code of conduct?

Now the rules are stricter and there are penalties for flouting the regulations. Dembele was the first to fall foul of them but, in a more disciplined structure, there has been an improvement. And once training begins Xavi is delighted with what he sees – few train better.

He has also shown a mental strength that the coach likes. After the transfer window closed in January, every time he came on he was whistled by Barcelona supporters. The deafening negativity remained with his first touches of the ball and most players would have crumbled under the animosity.

He responded with goals and assists, and when he scored there was no index finger to the lips or fingers in ears. After one goal into the roof of the net he just ran to Xavi who patted him on the head.

Well aware of how much Xavi believes in him it’s no surprise that he has responded. He is putting in good performances and that has brought an appreciation from team-mates that was missing before.

After the Frenchman scored against Athletic, Xavi celebrated by simply patting his head

Helped by the fact that his old pal from Borussia Dortmund, Pierre-Emerick Aubameyang, is now a key figure in the dressing room, Dembele feels he has squad status that reflects how much he cost.

In previous seasons the most expensive signing has been made to feel more like an apprentice.

One Spanish radio reporter even suggested he had been deliberately misled over training times by senior players playing a practical joke on the lost newbie.

Right now everything feels so good, why would he walk away? Even if there are greater riches on the table at Paris Saint-Germain or Newcastle.

But if he is so important, then as his agent will remind him, he should be paid accordingly.

It feels likely that Dembele will be made a new offer if and when talks take place with Sissoko.

It will be an improvement on the deal that was taken off the table last December. But will it be enough?

Barca believe the agent wants the greater riches available elsewhere and have urged the player to go against the wishes of his representative. How the power plan is resolved will set the agenda for the rest of Barcelona’s summer.