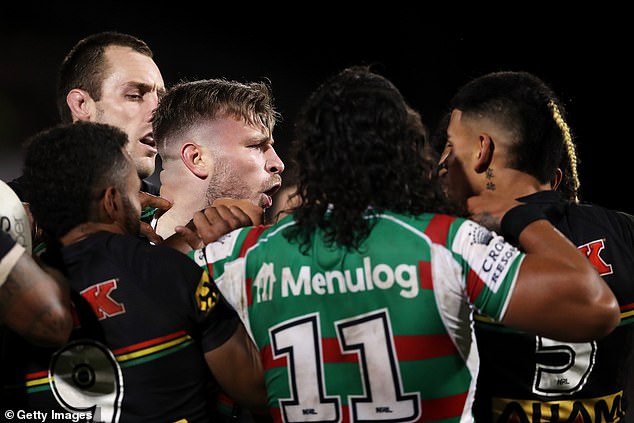 Penrith forward Spencer Leniu has revealed the source of the bad blood between him and Souths’ Jai Arrow that led to the pair being physically separated after their teams’ clash on Friday night.

Leniu also refused to shake Arrow’s hand after the Panthers’ 26-12 victory – an act he now regrets – but has revealed his anger stemmed from Arrow’s comments about halfback Nathan Cleary in the lead-up to the highly anticipated grand final rematch.

Arrow let it be known that he would target the No.7, who was returning for the first time in 2022 after having shoulder surgery in the off-season.

Leniu (right) revealed he was guilty of bad sportsmanship for refusing to shake Arrow’s hand after the Panthers’ win, but said he was angered by the Souths forward’s shots at Cleary

‘I thought he spoke too much about Cleary,’ Leniu told the Sydney Morning Herald.

‘I showed some bad sportsmanship by not really shaking his hand. That’s on me. I regret it now.

‘Every week teams try their best to get Nathan out of the game. As a pack, we know that, but we’ve always got his back.’

Last week Arrow lit the fuse for the confrontation as he said Souths would ‘definitely want to test his shoulder out’ when asked about Cleary’s first match back.

That came on the back of more bad blood between the sides stemming from last year’s grand final, won 14-12 by Penrith.

In that game Arrow was smashed with a high shot by Viliame Kikau on his first hit-up, with the Panthers forward saying the Bunnies enforcer wanted to fight him during the match.

Jai Arrow hits Viliame Kikau on Friday night. The pair had bad blood coming out of last year’s grand final, in which Kikau smashed Arrow early in the game, sending him to the head bin

That led Arrow to say ‘no doubt there will be a bit of fireworks and both packs will go after each other’ in last Friday night’s contest.

Apart from his run-in with Leniu, that didn’t really eventuate – with Penrith taking a 26-12 win.

Cleary emerged from the game unscathed but was seen angrily pointing and shouting at Souths centre Taane Milne after Penrith scored, while Bunnies halfback Lachlan Ilias was put on report for kicking Taylan May in the face as he scored a try.