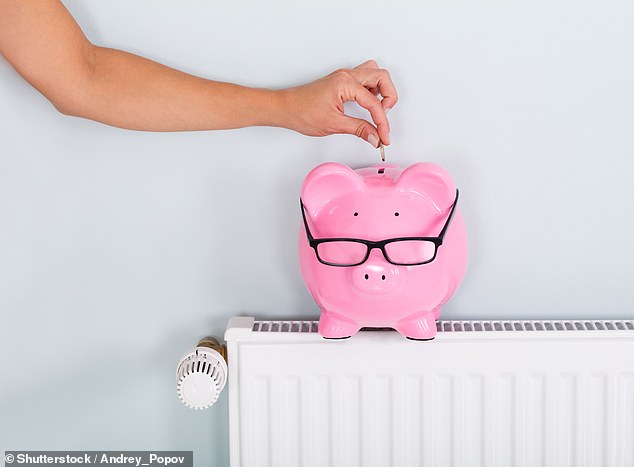 In the wake of the Government lifting the energy price cap on Friday, the average annual gas and electricity bill is set to rocket by a punishing £740 a year.

Households need to look at all possible ways to keep increases to a minimum.

So here are six gadgets you can buy that will wipe out most of the price increases over the next year.

Money in the bank: Households need to look at all possible ways to keep energy price  increases to a minimum

These cunning little devices are individual radiator thermostats that can detect when a room is not being used by using a light sensor – and automatically turn off the heating.

There is no need to have a degree in plumbing (or to worry about water leaks) to attach the valves. Simply unscrew the old radiator valve cover or thermostat by hand and replace it with a £50 device such as a RadBot.

The only inconvenience is that they take two AA batteries that must be installed and will last a couple of years.

To save £300 a year, install at least five of these devices. The more adventurous might instead consider a wifi-connected robo-valve.

Such gadgets, which include the £80 Netatmo smart radiator valve, allow you to control radiators and heating temperatures via a smartphone app – or even turn off radiators with voice commands using household ‘virtual assistants’ such as Amazon’s Alexa.

A traditional 60-watt halogen light bulb left on for ten hours a day can add £25 a year to your energy bill.

An equivalent LED bulb, using 85 per cent less energy, left on for the same amount of time may consume £4 of electricity.

The cost of LED bulbs has plummeted in recent years to as little as £2 each. The average home with 34 traditional bulbs kept on four hours a day might pay £340 a year in lighting electricity. Swapped for energy-saving bulbs that produce the same light, the equivalent bill falls to about £54.

Mark Sait, chief executive of eco-trader SaveMoneyCutCarbon, says: ‘Anyone can change a light bulb. Forget preconceptions – these new LED lights no longer emit a harsh light or take ages to warm up, but offer excellent value for money.’

Taking a shower rather than bath not only saves on water – using 32 litres rather than 100 litres – but also on the energy cost of keeping it piping hot.

A water-efficient shower head uses 60 per cent less water than a traditional one because it is aerated. It means a four-minute wash with an eco-shower head might save the average person who washes every day £40 a year on their energy bill than if they had used a traditional shower head – as the aerated head requires less electricity to heat.

It adds up to a saving of £160 for a family of four. You can spend as little as £10 on a basic Methven shower head, but a £30 Grohe Tempesta will feel far more refreshing. For pure luxury, consider a £160 Hansgrohe Croma.

Having a high-tech gadget controlling your entire heating system can help to mitigate the impact of rising energy prices. But it is an expensive investment and you may need to get an electrician to professionally fit it at a cost of around £100. For example, the Nest control (costing £190) replaces the beige hand-controlled dial box on the wall with an electronic gadget that includes a ‘learning thermostat’ that can automatically adapt heating habits by working out when you are at home.

You can also control it from a smartphone app. They can cut energy bills by as much as 15 per cent. Other smart thermostats to consider include the £179 Hive Active Heating console; £246 Honeywell Evohome; and £140 Drayton Wiser Smart Thermostat.

Unless household appliances such as the TV are turned off at the plug socket in the wall, they will still consume electricity. Although the cost is no more than 4p a day, it amounts to some £15 over a year.

For some households where computers, phone chargers, game consoles, set-top boxes and printers are plugged in, the annual cost may be nearer £50.

This cost could be nipped in the bud with a standby shutdown device such as Bye Bye Standby (cost £10). This plugs directly into an electric socket in the wall. You then plug your mains-powered electronics, such as a TV, into the By By socket.

You press a button to switch off standby or can use a remote control that might cost £10 extra.

Similar devices include a £9 ProElec and £15 Efergy EcoSocket. A £20 Energenie MiHome Wifi Smart Plug allows you to turn electrics off and on using your smartphone.

A typical tumble drier left on for an hour uses 35p of electricity – hopefully enough time to dry a full load. For a family washing four loads a week this can total £73 a year.

By putting in a fist-sized plastic dimpled £10 Ecoegg you can expect to reduce tumble drier time by up to 28 per cent as it helps move laundry around and allows it to dry quicker. This could end up knocking about £20 off the annual bill. Or, hang up clothes to dry outside!