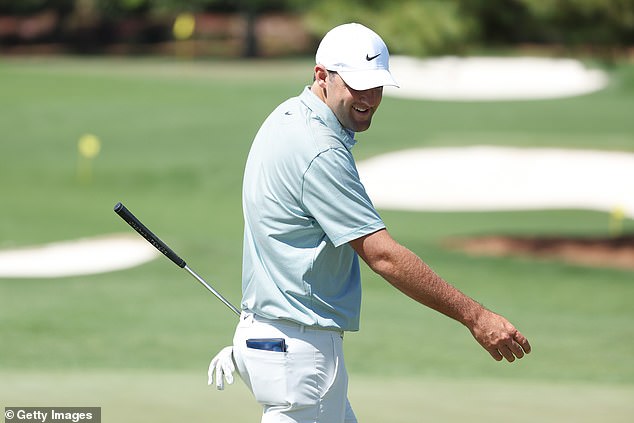 Can World No 1 Scottie Scheffler handle the heat as a form player and will John Rahm have extra motivation? The odds and form guide for the top contenders ahead of the Masters at Augusta National

The Masters begins at the famous Augusta National course this week, with the world’s top players set to battle it out for the first major of the season and the prestigious green jacket.

Who is in form and who is in need of last-minute inspiration? Sportsmail’s Derek Lawrenson assesses the top candidates for the green jacket…

Three wins in seven weeks should make him the favourite but who wins four times in such a short space of time? There is also the question of how is he going to react to being the new world No 1. Certainly has the physical tools to win.

A slow start to the year for the Open champion who carried all before him last season. Is he suffering from a hangover following all the euphoria? Certainly, his approach shots have been well below the imperious standard we have come to expect from the best iron player in the game.

How can such a silky putter have been so comically bad on the greens so far this year? Cost him his world No 1 spot but that could well provide added motivation for the mighty Spaniard, who won the US Open last year and finished in the top 10 in the other three majors.

What is not to like about the Norwegian? You would strongly rate his chances bar one not insignificant detail: he is not great at chipping from tight lies. Keeping such shots to a minimum will be key.

Like Morikawa, has started the season slowly after his fabulous exploits last year but might prove a good sleeper bet. One thing we do know is he won’t be scared of winning if he finds himself in contention.

Twice a winner already this year, including the Players Championship last month, can he become just the second Aussie to win the green jacket? Runner-up in the November Masters 18 months ago.

Five years now since his breakthrough major success in the 2017 US PGA Championship. Got the game to win more but needs to stay out of his own way.

Looked close to invincible for a couple of years as he won four majors at breakneck speed. Done nothing so far to suggest he can return to that sort of form — but then he didn’t in the build-up when claiming his Grand Slams.

New swing but his putting has gone to pot. Never rule Spieth out of the Masters, however. He is just a different player when he drives down Magnolia Lane.

Any chance of a Brit winning for just the second time since 1996? Hatton might be the best bet. Like Danny Willett in 2016, he has the nerve. The big question is will he be around the lead come Sunday to show it?

There is a feeling among many in the game that Rory is playing a lot better than his recent results suggest. The Masters will tell us, one way or the other.

No top-20 finishes at Augusta and no form coming into the event. No chance.