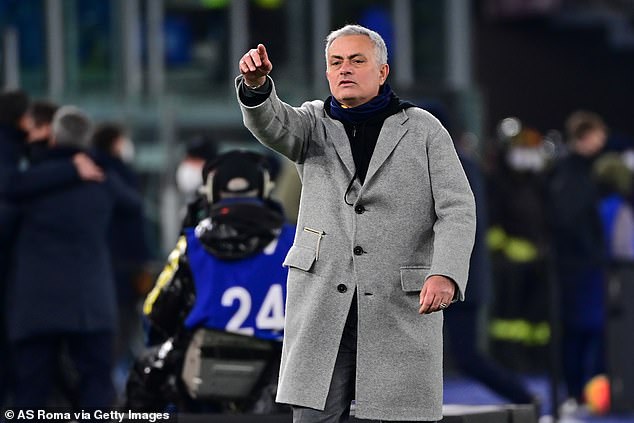 ‘You s*** yourself a little bit in front of me’: Roma boss Jose Mourinho confronts journalist at pre-match press conference after he was criticised on the radio in ‘aggressive and violent’ way

Roma manager Jose Mourinho confronted a journalist in his pre-match press conference ahead of the Serie A clash against Sampdoria.

Journalist Alessandro Austini criticised Mourinho on Italian radio recently and then asked a question about tactics in the press conference.

Mourinho revealed was expecting a tougher question from Austini and said that the journalist ‘s*** himself’ in front of him.

Mourinho said: ‘I was expecting a much more aggressive question, more negative and violent after I listened to you on the radio.

‘I didn’t expect such an easy question. My conclusion is that you are much more aggressive and violent on the radio but when you come here you s*** yourself a little bit in front of me.’

Mourinho has received a lot of criticism from the Italian press during his first season as Roma boss.

His team are currently in seventh place in Serie A, while they were knocked out by Inter Milan at the quarter-finals stage of the Coppa Italia.

Roma suffered an embarrassing 6-1 defeat to Bodo/Glimt in the group stages of the Europa Conference League, but they still managed to progress in that competition and will face the Norwegian side again in the quarter-finals.

In addition, Mourinho had a tetchy interview with Norwegian reporter Jan Age Fjortoft.

After a draw with Bodo/Glimt in which his side had two penalty claims turned down, Mourinho said: ‘Look, the referee has to explain but they don’t speak.

And when Mourinho was asked what the referee did wrong, he said: ‘Did you watch the game?’

‘Yes, of course,’ Fjortoft replied, ‘But I want it from you. What did you see from your point of view?’

Mourinho continued to turn the interview around onto the reporter, but Fjortoft insisted: ‘I want to hear the from the Roma coach.’