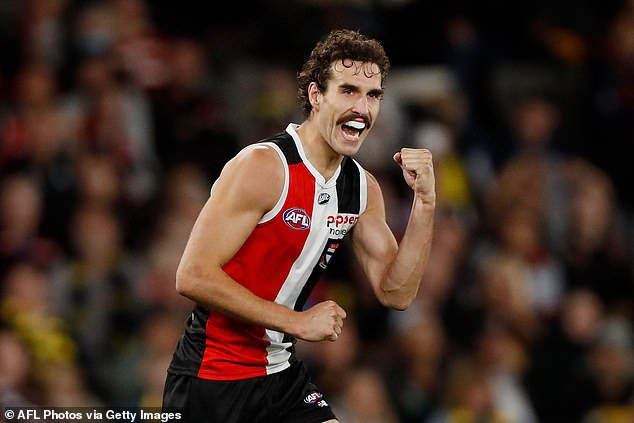 St Kilda gun Max King hailed as the ‘next Buddy Franklin’ by Ben Dixon after leading Saints to victory over Tigers: ‘He’s going to kick a bag of goals’

Ben Dixon believes the AFL has found the ‘next Buddy Franklin’ in Max King, tipping the St Kilda forward for a ‘superstar’ future.

Held goalless for the first three quarters, King burst into life in the final period to turn the game on its head for the second straight week after kicking 3.1 in the third period to lead the Saints to a win against Fremantle in Round 2.

‘We’re looking at the next Buddy Franklin,’ Dixon, who kicked 282 goals in 203 games for Hawthorn, told Fox Footy’s First Crack on Monday night.

‘Because [he has] two shots at goal a quarter, he’s having eight shots [in a game]. He’s going to kick a bag of goals, this boy.

The Saints forward took six marks against the Tigers, all of which came inside the forward 50

King has now bagged nine goals so far this season, joint-second in the Coleman Medal leaderboard behind North Melbourne forward Nick Larkey who has kicked 10 majors in the first four rounds.

‘He’s going to be a superstar,’ Dixon added.

‘And when you’re getting that many shots at goal, you’re going to kick some big bags.’

Last month, Franklin became only the sixth player in VFL/AFL history to reach the 1,000-goal milestone after kicking four goals against Geelong in front of a delirious crowd at the SCG.

In Round 2, King kicked three goals in the third term as the Saints overcame Fremantle

Franklin has led his clubs’ goal charts in 12 separate seasons – six times for Hawthorn and six times for the Swans – and has kicked over 50 goals in half his 16 completed seasons.

In 2008, he famously kicked a mammoth 113 goals and has booted nine goals in the same game on three separate occasions, passed the double-digit mark in a single game twice.

While King has a lot to live up to if he’s to reach the incredibly high standards set by Franklin, Saints coach Brett Ratten believes the 21-year-old’s ability to turn a game on its head will make him a star.

‘Some of the elite players or the very good players of the competition have the ability to change games, whether it’s only two possessions, three possessions or 10 and Max is one of those players who can do that,’ Ratten told AAP on Sunday.

‘He’s still growing but he’s pretty exciting when he launches at the ball.

‘Everybody expects Max to do everything every week and he’s a young man still developing. But to see glimpses of that and he is a very good player, but he’s still building. So it’s great to see.