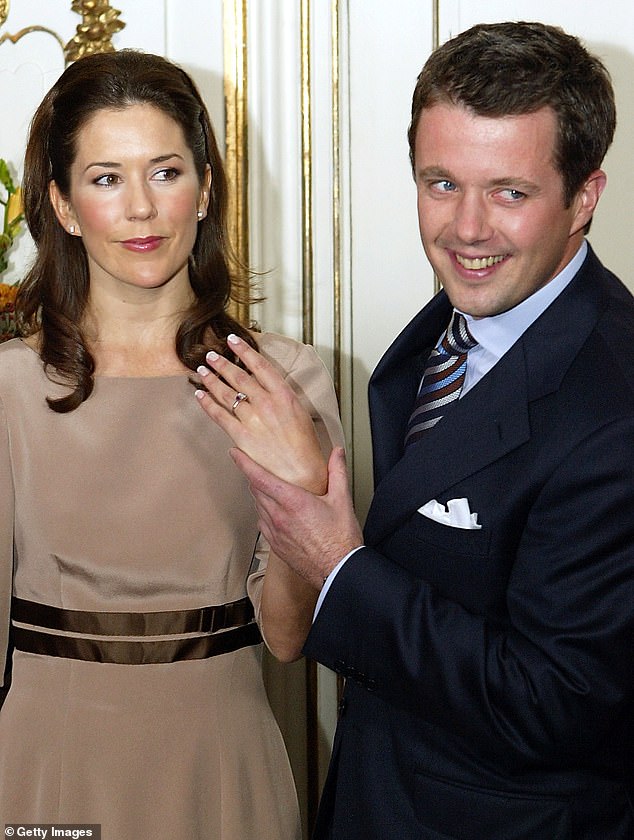 Crown Princess Mary of Denmark has made a sentimental alteration to her engagement ring since her wedding to Prince Frederik in 2004.

The ring was designed to match the national flag of Denmark and originally featured a 1.5 carat emerald-cut diamond positioned between two emerald cut rubies.

But over time, Princess Mary has updated the ring by adding two diamond baguettes, said to represent the couple’s four children.

The ring has increased in value by around $17,468 since she made these additions.

Taking a close look at the stunning ring, the jewellery experts at Steven Stone Jewellers reveal what the alteration could symbolise.

Since her wedding to Prince Frederik in 2004, Crown Princess Mary of Denmark has made a sentimental alteration to her engagement ring

THEN: The ring was designed to match the national flag of Denmark and originally featured a 1.5 carat emerald-cut diamond positioned between two emerald cut rubies (pictured)

‘Since her wedding, the Crown Princess has added two 50-point diamond baguettes, which have undoubtedly increased the value and I’d estimate this to be $50,000.

‘When we see a ring with multiple stones like this, they typically represent something and it’s likely that Princess Mary’s alteration is a sentimental one, with the four stones reportedly representing the couple’s four children.’

He added that Meghan Markle also opted to tweak her eternity ring by ‘updating it’ with the birthstones of Prince Harry and Archie.

Last week Princess Mary shocked royal fans after she was spotted having lunch and shopping in Melbourne with her long-time best friend Amber Petty, who was also a bridesmaid at her wedding to Prince Frederik.

The 50-year-old from Hobart, Tasmania, returned to Australia flying a Thai Airways flight several days ago, as reported by the Sydney Morning Herald.

On Friday she was spotted wandering Brighton, 11km south-east of Melbourne, with Petty and another acquaintance.

Romantic: On May 14, 2004, Mary married her Prince in a lavish ceremony attended by royals – and media – from across the globe in Copenhagen Cathedral in the Danish capital

The three friends appeared relaxed as they spoke on the corner in front of Brighton Schoolhouse down St Andrews Street – opposite where Princess Mary and Petty dined for lunch two days ago.

The Australian advertising executive, who remains close to Princess Mary, saw the beginning of her friend’s fairytale romance with Frederik, 52, which she details in her new book, This Is Not A Love Song

On Wednesday the royal graced Brighton’s The Pantry with her presence as she dined on a light lunch before traipsing down the suburb’s main shopping district for some retail therapy.

One fan who was in Scanlan Theodore at the time the royal strode in said she walked out with a new designer suit.

With only a small security detail and her bridesmaid Petty by her side the surprise visit went unnoticed by plenty of royal fans.

Amber Petty (right image: in bright pink) was a bridesmaid at Princess Mary’s nuptials in 2004

It is understood by the publication that Princess Mary will fly on to Tasmania, where she was born and raised, to see family before heading back to Denmark.

She was last seen publicly at a media competition in Denmark on March 22, just over a week before her Melbourne jaunt.

Her last known visit to Australia was in 2017 on another private family holiday.