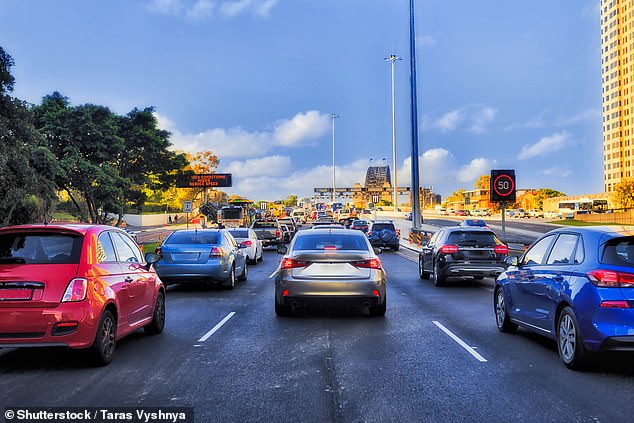 Thousands of motorists have been unfairly overcharged in a second tolling ‘stuff-up’ in the space of a few days.

The NSW Government demanded answers after 78,000 motorists were incorrectly charged double on their e-toll accounts for unpaid trips incurred by other drivers.

The latest blunder is on top of 45,000 drivers who were also incorrectly debited due to an automatic top-up issue last week.

Sydney transport company owner Jason Clenton was among those originally affected and said he was yet to get a cent back.

He told Daily Mail Australia he was slugged $57,000 in 47 transactions over five days between March 21-25 and urged motorists and other business owners to double check their e-toll accounts.

The latest tolling bungle was identified by Transport for NSW on Friday – the same day the costs of tolls rose by as much as 12c.

A review into the system has been launched as Roads Minister Natalie Ward confirmed the second error from the recent IT software upgrade.

Another 80,000 Sydneysiders have been overcharged for tolls. Pictured is traffic on Sydney’s Western Distributor

The minister said she was ‘furious’ when she learned of the latest blunder.

‘It has meant new owners of cars have been incorrectly charged for previous owners’ trips on their on their e-toll accounts,’ Ms Ward told 2GB radio on Monday.

‘This is entirely unacceptable.

‘For the majority of those customers, this issue has since been resolved and that has refunded to those accounts but some that have triggered an automatic top-up on their account and those are being worked on.

‘But it’s not okay. I was furious when I found about the second lot and I just want to apologise again to everyone for the inconvenience caused.’

Ms Ward demanded a Transport for NSW review into the IT contract.

‘It’s not acceptable that e-toll customers be inconvenienced by an IT upgrade,’ she said.

‘I realise upgrades need to be done but they need to test the systems better so I’ve made it absolutely fundamentally clear to the the department I want that contract looked into.

‘This can’t continue to happen, so needs to be worked through line by line so every single customer is contacted.’

Ms Ward said the most of the overcharged motorists have since had the money refunded back into their bank accounts.

This was disputed by Mr Clenton, who claimed he hadn’t been paid a cent.

‘I still haven’t received my refund of $57,000 in my business bank account…. Totally unacceptable,’ he posted on Facebook on Sunday.

‘Service NSW did call me on Friday, NOT to offer a refund but to ask me to withdraw my dispute regarding my e-toll transactions with St George Bank.’

He deactivated his e-toll account after 47 unauthorised transactions were made between March 21-25.

‘The minister assured me on Friday that the full amount would be in my account by 5pm Friday,’ Mr Clenton told Daily Mail Australia on Monday.

‘I haven’t received anything. It’s put unwanted stress on me and my business.’

Ms Ward claimed the almost $10,000 he was owed was transferred into his account on Friday and that the remainder amount consisted of ‘valid toll charges’, sparking an on-air war of words with Mr Clenton.

‘I need her to stop apologising and do something about it,’ he told the program on Monday.

Ms Ward said the department was working ‘closely’ with Mr Clenton about the ‘valid’ toll charges, a claim he refuted.

He said he was willing to negotiate and work with the department about the toll charges, but not until the $57,000 was reimbursed.

‘I’m not working with Transport for NSW until they refund the money that has been stolen out of my business bank account,’ he told Ms Ward on 2GB.

Mr Clenton later told Daily Mail Australia he wants the minister to get in direct contact with him to solve the matter.

‘Put the money back into people’s accounts so they can get on with their lives,’ he said.

‘She needs to come out and assure business owners this isn’t going to happen again.’

He wasn’t surprised when news emerged another 78,000 was overcharged, taking number of affected motorists to almost 125,000.

‘Who knows how many more have been affected?’ Mr Clenton said.

Ms Ward claimed that aside from Mr Clenton, the majority of other affected customers have been reimbursed but was told 628 refund payments were rejected by financial institutions for various reasons.

An inquiry hearing into NSW tolls was cancelled on Friday as parliament instead met to pass amendments to roads and crimes legislations targeting climate change activists who blocked roads and ports.

Transport for NSW said its review into the ‘unacceptable’ bungle would continue.

‘Transport for NSW apologises unreservedly once again to all our customers affected by these unacceptable errors. We continue to do everything we can to minimise any further customer impacts,’ chief operations officer Howard Collins said.

Mr Clenton is one of 45,000 E-Toll users who were accidentally charged double the regular fee for using a toll road