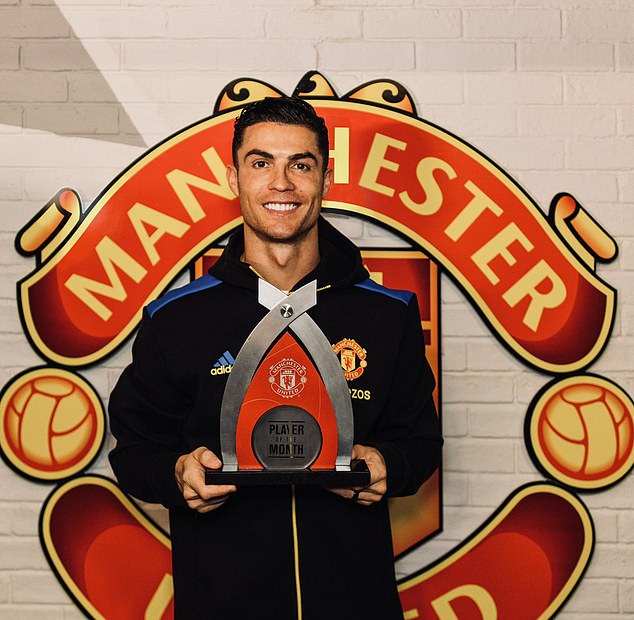 Cristiano Ronaldo is announced as Manchester United’s player of the month for March, despite having only appeared in the league ONCE and being part of the side dumped out of the Champions League

Manchester United have announced Cristiano Ronaldo as their player of the month for March.

In a month that saw Manchester United fall further behind in the chase for the top four, Ronaldo gained credit for his hat-trick against fellow Champions League chasers Tottenham Hotspur.

Having already picked up the Premier League’s official goal of the month for his opening strike in that game, Ronaldo spoke of his delight at picking up his third such gong of the season, drawing level with David De Gea.

He told Manchester United’s official website: ‘Lovely. Thank you very much for these votes. I feel so happy and motivated for the rest of the season.’

He added: ‘I will do my best like [I do] all the time so thank you to all of them and see you soon in Old Trafford. Thank you guys!’

Ronaldo’s March otherwise proved to be a disappointing one, having not played in Manchester United’s 4-1 loss to rivals Manchester City at the beginning of the month.

The Portuguese was part of the side that was defeated at home by Atletico Madrid in the last 16 of the Champions League.

Meanwhile, amid growing discussions about Ronaldo’s ongoing suitability for Manchester United, his former teammate Wayne Rooney has said that the club would be wise to move on from him this summer.

The Derby County manager told Monday Night Football: ‘Obviously Cristiano is getting on a bit.’

‘He’s certainly obviously not the player he was in his 20s and that happens, that’s football,’ he added.

‘He’s a goal threat but the rest of the game, they need more and they need young, hungry players.’

Asked about whether the five-time Ballon d’Or winner had been a success this season, Rooney responded: ‘I’d say no at the minute. He’s scored goals, he’s scored important goals in the Champions League early on.

‘He scored the hat-trick against Tottenham [last month] but I think if you’re looking to the future of the club I think you have to go with younger, hungry players to do the best to lift Manchester United over these next two to three years.’