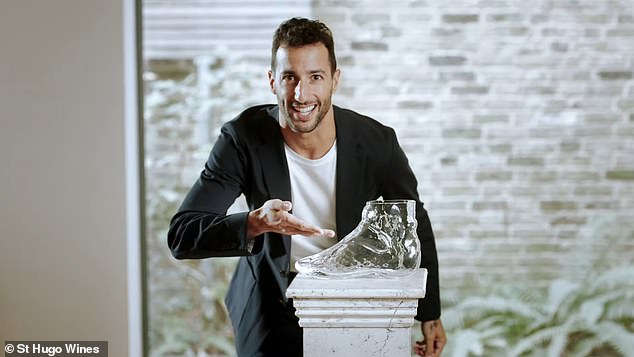 If you’ve ever wanted to re-create Daniel Ricciardo’s famous ‘shoey’ celebration at home but were worried about the health ramifications of drinking out of a sweaty piece of footwear, have we got news for you.

The Australian Formula One star has partnered with the St Hugo wine brand to produce a hand-blown glass decanter that’s an exact replica of his racing shoe, which comes complete with a letter from the driver and a certificate of authenticity.

Ricciardo is a leading exponent of the ‘shoey’, which sees him drink champagne out of his racing boot whenever he makes the podium in Formula One.

The Aussie F1 star is famed for his ‘shoey’ celebrations, which see him guzzle champagne out of his boot whenever he makes the podium

He most recently did so after winning last year’s Italian Grand Prix at Monza, and famously convinced actor Sir Patrick Stewart to join him in the bizarre habit when he ran third in the 2018 Canadian GP in Montreal.

It’s believed the ‘shoey’ was kicked off by Australian V8 Supercars drivers in 2014, and it’s since been adopted by a range of athletes including Aussie UFC star Tai Tuivasa.

Ricciardo partnered with Barossa Valley-based St Hugo in 2021 to produce a range of drops christened DR3, after his initials and the number of his F1 car.

Each decanter costs $700 and comes with a certificate of authenticity and a letter from Ricciardo, who describes it as ‘the perfect glassware’

The decanter took 100 hours to design, and the limited run are all hand-blown and moulded to create unique pieces that will sell for $700 each.

In a video for the launch of his new DR3 II vintage, Ricciardo says, ‘It’s so good, I struggled to find a vessel worthy of the wine.

‘I needed something refined. Something truly Ricciardo, something that would make the wine taste like a podium finish.

‘Then I realised that the perfect glassware didn’t exist, so I had it made … an exact replica of my racing shoe.’

It’s unlikely we’ll see Ricciardo doing a shoey on the podium at this weekend’s Australian Grand Prix as his McLaren team is struggling mightily so far in 2022.

The 32-year-old finished 14th in the season-opening Bahrain GP, and failed to finish in the following week’s race in Saudi Arabia.

McLaren has only scored six points so far this year – its worst start to a campaign since 2017 – and can’t find the pace to break out of the midfield.

It’s a huge blow for one of the proudest names in the sport, especially after showing great promise in 2021, when it came fourth in the constructors championship.