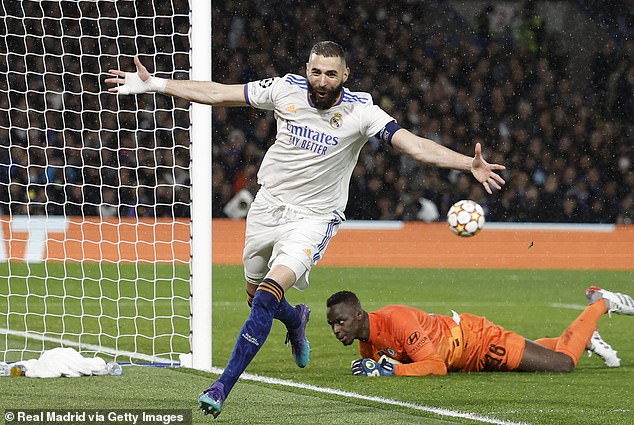 ‘He is the talisman, he’s the leader now and he’s stepped out of the shadows of Cristiano Ronaldo’: Rio Ferdinand hails Karim Benzema after his hat-trick against Chelsea… and insists ‘they should be engraving his name on the Ballon d’Or’

Former Manchester United defender Rio Ferdinand has lauded Karim Benzema ‘the best number 9 on the planet’ and insists they should already be engraving his name on the Ballon d’Or.

The 34-year-old Frenchman notched a hat-trick to guide Real Madrid to a 3-1 victory over Chelsea in the first leg of their Champions League quarter-final tie.

The striker has now scored 37 goals, his best-ever tally, in just 37 appearances so far this campaign for Los Blancos.

His hat-trick follows a brace in their 2-1 win over Celta Vigo in the LaLiga on the weekend and a hat-trick to dump PSG out of the last-16 of the Champions League.

Benzema’s efforts this season are not going unnoticed and perhaps the fact that he has to step up now without playing understudy to Cristiano Ronaldo has improved his game.

‘This is the business end and he is still scoring goals. He has shot his team to the top of the league, they’re 12 points clear,’ Ferdinand said on BT Sport.

‘He is the talisman, he is the leader now, and he has stepped out of the shadows of Cristiano Ronaldo.

Benzema has scored 37 goals this season, his best-ever tally for Real Madrid

‘We mentioned before the game, having that humility, to be able to sit in the background.

‘As soon as that opportunity came for it to come out of the shadows for this team and take control of it. In all aspects of his game he has gone up another level.

‘He is the best number 9 on the planet for me. We can talk about Lewandowski, great player.

‘Harry Kane has come back into that form we all knew about, great player. This guy (Benzema) at the moment is another level.

‘He is phenomenal, he is impacting the game in so many different areas, not just goals, assists, link up play and slowing the game down. That sounds like a playmaker, but that’s a number 9 that has scored 37 goals.’

Ferdinand even went on to insists that the Real Madrid striker should be the frontrunner for the Balloon d’Or.

‘He’s been magic, the last tie he was magnificent, got a hat-trick then another hat-trick here. This man was the difference.

‘Yes, they got their tactics right, especially in the first-half. Vinicius hanging out in the wide areas, pinning back Andreas Christensen, and then the chances came his way and he dispatched them beautifully.

‘An absolute complete forward and it was a masterclass from him.’

His fellow pundits Joe Cole and Steve McManaman agreed with him and spoke about his sheer quality on all of his goals at Stamford Bridge.

Cole said: ‘The decision making, the ability to stay calm and use the right technique, all his momentum is going back.

‘He knows he has to guide it up and over Mendy. Mendy is an outstanding shot-stopper, it’s just an excellent goal. He wouldn’t score that goal at 21, he is getting better with age.’

McManaman added: ‘It’s his movement in and out, he knows he doesn’t have to fly into the box. He knows where all the defenders are, his experience counts for everything.

‘He scored two at the weekend to take Madrid clear again, and then another three tonight.

‘Three against PSG. He missed the Classico. Everytime he steps on the pitch he looks like he is going to score a goal now. He is averaging a goal a game in this year. It’s just superb.’