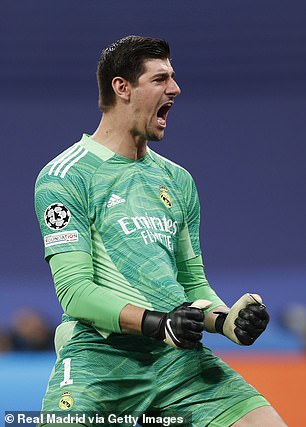 PETE JENSON: Thibaut Courtois and Karim Benzema are more important than EVER to Real Madrid… their fans will tell you they are the best in the world right now and the pair will be vital if they are to see off Chelsea

Real Madrid face Chelsea tonight, not quite as a two-man team, but relying hugely on their goalkeeper and their centre-forward to get them over the line in LaLiga, and to send them into the Champions League quarter-finals.

Thibaut Courtois and Karim Benzema were already the most important players in the side in the first half of the season but with the slight dropping off in form of Vinicius, and some signs that a lack of rotation is taking its toll in midfield and defence, the Belgian and the Frenchman are more important than ever.

Their last two games in LaLiga have illustrated that. Benzema was missing against Barcelona and Carlo Ancelotti’s attempt at replacing him with Luka Modric as a false nine was a disaster.

The coach’s only excuse was that all the other ways of trying to make up for his absence had failed previously. Benzema has missed eight games and of the six different players chosen to fill his boots, none have scored.

At the weekend he scored the two goals against Celta Vigo that earned Real Madrid all three points and took him to 34 goals for the season – his best ever tally at the club.

At the other end of the pitch Real Madrid have a decent claim to having the best goalkeeper in the world right now – not something they have been able to say since the days of Iker Casillas.

Had Courtois not been Real Madrid’s man-of-the-match against Barcelona in the side’s last home game, the 4-0 scoreline could have been even worse. And at the weekend he produced one of the saves of the season to push away an Iago Aspas free-kick.

It’s all a far cry from the days when he felt like the odd-man out at a club where those close to Keylor Navas, who he originally shared game time with, had not gone out of their way to make him feel at home.

Captain Sergio Ramos was very much an ally of Navas and without the then-skipper’s support there were some difficult moments, especially when he struggled for form at times.

He has worked relentlessly on parts of his game that needed improving like distribution, while maintaining the ability to make at least won vital save per game. ‘I made a couple of great saves in the first half,’ he said after the win over Celta Vigo.

No one complains at the lack of modesty because everyone knows it’s true – Madrid are closing in on the domestic title and in the last eight in Europe largely thanks to their keeper.

Courtois used to feel like the odd-man out at Real Madrid, when Keylor Navas (front) had allies

All that’s missing is that they truly take him to heart as they once did Casillas. Courtois is one of those players whose moves between clubs have not always helped him secure a place in the affections of any one set of supporters.

Of Chelsea’s fans, he told UEFA this week: ‘They want to win and so do I, so I don’t expect applause. I hope they don’t boo me but you never know. I’m glad to be going back with fans because last year the stadium was empty.’

Courtois and Benzema’s form is the counterpoint to the slight tailing off from Vinicius whose early season brilliance was always going to be difficult to maintain throughout the entire campaign.

He has scored 14 in LaLiga but only four have come since the turn of the year. And on the other flank in Madrid’s front three there is still no one player claiming the position for themselves.

Eden Hazard misses out on the chance to go back to where he played the best football of his career. It’s been another write-off of a season for the Belgian international who is now recovering from an operation to remove a metal plate in his shin.

Real Madrid breathed a sigh of relief when the draw was made for the Champions League quarter-final. They didn’t want Manchester City or Liverpool. Of the Premier League teams left in, their preferred option was the reigning champions.

In part that’s because their record against European Cup holders is excellent. You have to go back 30 years to the 1989-90 season for the last time they lost to a side that had won the Champions League the previous campaign. In total Madrid have beaten the holders eight times in 11 games.

That will be on their side this week but far more important will be the presence of the two men most Madrid fans will tell you are currently the best goalkeeper and best centre-forward in the world right now.