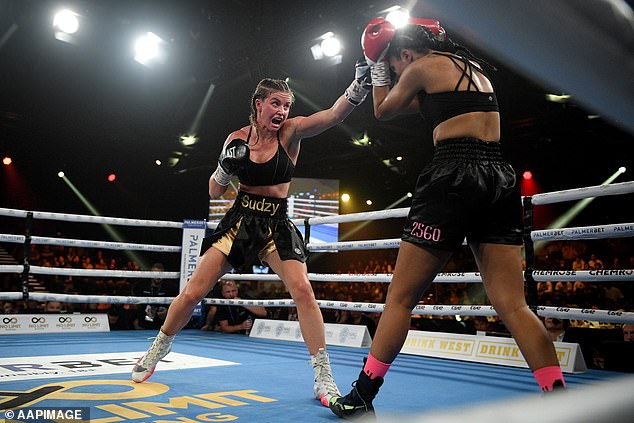 Ashleigh Sims and Shanell Dargan put on a fight for the ages as they both made their professional debuts on the undercard of Harry Garside’s Australian lightweight title tilt on Wednesday night – with one Aussie boxing legend labelling the bout one of the best he’s ever seen.

Sims, who is married to St George Illawarra forward Tariq, slugged her way to a majority draw with Dargan over four two-minute rounds packed to overflowing with toe-to-toe action at Sydney’s Hordern Pavilion.

Despite being nailed in the opening two rounds, Sims punched her way back into the bout and landed several heavy shots as the momentum kept swinging from fighter to fighter.

Dargan – who featured on X Factor Australia in 2014 – lands a hard left on Sims. Both fighters got a $5,000 bonus for the terrific display and Sims is keen for a rematch

Australian boxing legend Barry Michael, who held the IBF world super featherweight title in 1985, described the stoush as one of the best women’s fights he has ever seen.

Before the judges could deliver their verdict, promoter and former NRL cult figure George Rose awarded Sim and Dargan $5,000 each for thrilling the crowd.

‘I knew it was going to be a war,’ Sims said after the final bell.

‘I think everyone underestimated me because of who my husband is and that I’m a mum and all the rest of it, but I’ve got grit.

‘I’ve probably got bigger balls than most of the men in here. I f***ing love this sport, I’ve been out of the ring for over three years.

Despite showing a lot of class in just his second pro fight, Garside said he turned in a ‘terrible performance’ to take the Australian lightweight title

Michael said Garside ‘never lost a round’, and the bronze medal winner from the Tokyo Olympics almost finished the contest in the ninth when he had Matet in deep trouble with a series of power shots.

But Garside had a very different opinion of his performance.

‘I’m going to go back to the gym, watch that fight again and there’s always room for improvement.’