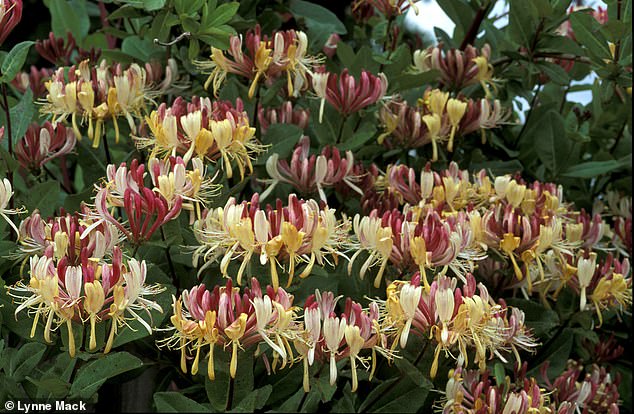 A TASTE OF HONEYSUCKLE: Enjoy the scent of Shakespeare’s woodbine and its 180 varieties

The old traditional name for the fragrant climber honeysuckle is woodbine. In A Midsummer Night’s Dream, the Bard weaves woodbine and musk roses over Queen Titania’s woodland bower. But jazz pianist Fats Waller sings to his Honeysuckle Rose.

By any name, the beauty and scent of honeysuckle can never be erased. Among the 180 Lonicera species, there are free-standing shrubs as well as climbers. Shrub varieties include fragrant, winter-blooming Lonicera fragrantissima. A small-leaved evergreen, L. nitida, is a great choice for neat, formal hedging.

Unlike box, it’s less troubled by pests and diseases and doesn’t smell like tomcats. There are also spring and summer-flowering shrubs such as L. tatarica and L. ledebourii.

Though interesting, these are hardly show-stoppers and take up a lot of space. But for large gardens, they’re worth growing.

Our only native honeysuckle, L. periclymenum, is a climber with garden value. In the wild it’s common almost everywhere. You’ll find it in ancient woodland and in sunny glades.

Peak flowering time is June, when wild roses are also in the hedges. Their pink or white flowers blend with the creamy yellows of the honeysuckles.

In a garden, wild honeysuckle is as pretty as any cultivated variety. Easy to grow, it thrives in almost any soil that drains freely. Though it’s drought-proof, growth is always more luxuriant in a damp summer.

Common wild honeysuckles show subtle colour variations. On some, the buds can be flushed with dusky pink. In others, they are cream to primrose. One of the finest named varieties is L . periclymenum Graham Thomas. Mr Thomas — an inspired plantsman — spotted the original on a country walk. He also noticed that after a heavy June flush, later flowers were also plentiful. He took cuttings.

The variety was given his name and is still a bestseller.

Native honeysuckle has a subtle perfume. For some it’s hard to detect, especially in daytime. But if you plant it near an outdoor seating area, the evening fragrance is delightful. With other garden varieties, the gardening nigel Colborn Early blooms: The Dutch intensely perfumed Lonicera periclymenum Belgica flowers may look similar but appear at different times. The first to flower is early Dutch L. periclymenum Belgica. Mature plants become smothered with intensely fragrant flowers from April through May. The developing flower tubes are deep red but open to cream interiors.

Among exotics, Japanese honeysuckle, L. japonica, is one of the best. Fast-growing, it carries fragrant flowers in pairs. The best garden form is L. j. Halliana, a rampant grower whose cream-yellow flowers are doubly fragrant.

Japanese honeysuckles flower from mid-June. Growth is rapid and constant, so regular pruning is essential. But blooming is also constant, often into November.

Climbing honeysuckles thrive in any soil if it drains freely. Like many climbers, the roots prefer shade but top-growth needs sun. You can cool roots with mulches. When pruning, remove weak stems and shorten over-long branches. Tie in long, loose stems. Propagation is easy, from semi-ripe autumn cuttings.