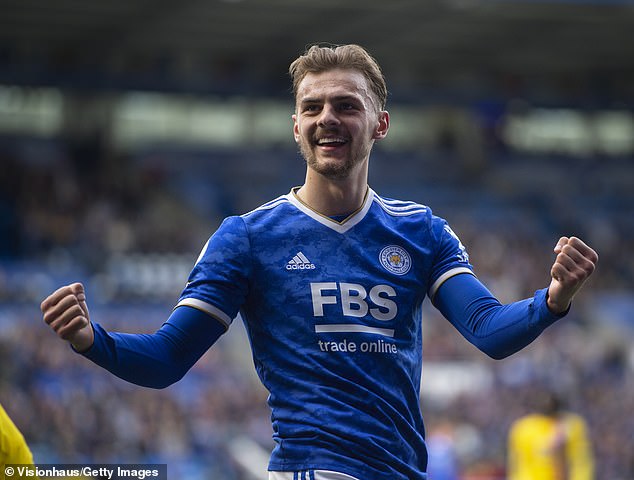 Kiernan Dewsbury-Hall made his first Premier League start less than five months ago but he is already Leicester City’s player of the season and if he maintains this form then England recognition will not be far away.

With his jet-black boots, no-frills haircut and unfussy demeanour, Dewsbury-Hall is the antithesis of many of today’s stars —but he has little reason to envy them once he gets on to the pitch.

Playing on the left of a three-man midfield, he tries to win back the ball as though it is a precious family heirloom. And when he has it, he has eye-catching quality.

The ball for Ademola Lookman’s opener against Crystal Palace, played with fabulous disguise inside Nathaniel Clyne, might have come from the boot of Zinedine Zidane. And the great Frenchman would also have been proud of Dewsbury-Hall’s perfectly struck effort that picked out the top corner from 20 yards for his first Premier League goal.

That put Leicester two up at the break against the FA Cup semi-finalists and though Wilfried Zaha scored with 25 minutes left — after Kasper Schmeichel had saved his retaken penalty, as well as the original spot-kick — the Foxes held on to climb over Palace into ninth.

‘Since he has come in to the side Kiernan has represented everything I want in my teams,’ said Leicester boss Brendan Rodgers. ‘He is honest and works hard, and then he has quality.

‘As a No8, his job is to create and score. He makes a lovely pass for the first goal and the second goal was first-class. There is no question he has become a very important player for us. He was outstanding here.’

Despite Sunday’s Wembley date with Chelsea, boss Patrick Vieira named the same starting XI that helped beat Arsenal 3-0. With one eye on Thursday’s Europa Conference League quarter-final second leg at PSV Eindhoven, Brendan Rodgers made seven changes to his starting XI and one of them — Lookman — made the breakthrough six minutes before half-time.

James Justin stole the ball from Zaha, allowing Youri Tielemans to transfer it to Dewsbury-Hall. The midfielder found the perfect pass for Lookman, who held off Clyne, stepped inside Joachim Andersen and drilled home from 15 yards.

Playing on the left of a three-man midfield, he tries to win back the ball as though it is a precious family heirloom. And when he has it, he has eye-catching quality

As a result, England manager Gareth Southgate could come calling for the Leicester star

Dewsbury-Hall then produced one of the moments of the season at this stadium to double his side’s lead. Trying to cut out Justin’s pass down the line, Marc Guehi slipped and let in Patson Daka. When he collected Daka’s cut-back, Dewsbury-Hall had plenty to do but he tiptoed cleverly around Cheikhou Kouyate and arrowed one past Vicente Guaita from 20 yards.

Midway through the second half, Palace pulled a goal back when Youri Tielemans tripped Jordan Ayew inside the box and though Schmeichel saved Zaha’s weak effort, a retake was ordered as Caglar Soyuncu had encroached into the box. Once more, Schmeichel stopped Zaha’s kick yet Palace’s luck was in as the loose ball fell perfectly for Zaha, who headed it home. Thereafter, however, they failed to create a clear opportunity beyond two goalmouth scrambles.

Vieira confirmed Zaha would remain on penalty duty and also revealed defender Tyrick Mitchell, who went off in the first half, is a doubt for the semi-final with a calf injury. He added: ‘Leicester were the better team in the first half. We were better in the second half but we gave ourselves too much to do.’