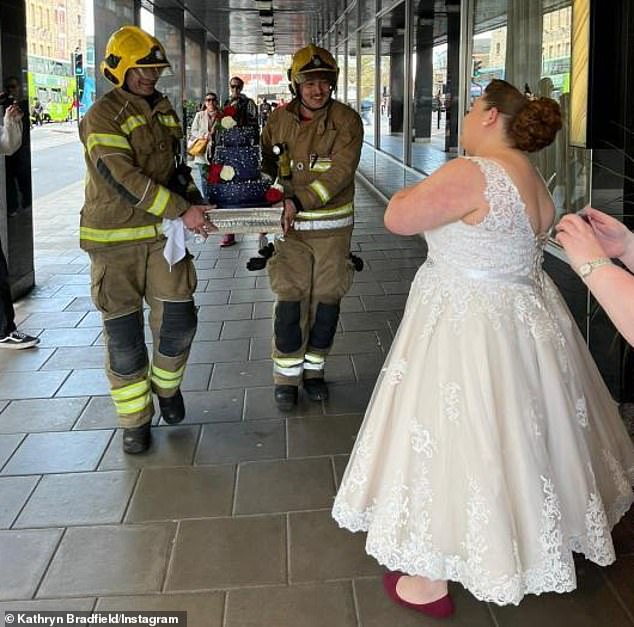 A bride and groom had to evacuate their wedding venue when a huge blaze broke out — but heroic fireman managed to save their cake.

The fire started on the roof of the We The Curious science and arts centre in Bristol, just before the wedding ceremony of groom James Leggett and his bride-to-be Amy Heath could take place.

It sent thick plumes of smoke billowing over the city and prompted a major emergency response on Saturday.

Firecrews managed to save the blue three-tier wedding cake, as well as sentimental photos at We The Curious science and arts centre

HGV driver Mr Leggett wrote on Twitter: ‘Didn’t *quite* get married, the venue caught fire as I was waiting for the guests to arrive…’, and shared a picture of himself in his wedding suit, with the smoke column in the background.

Despite the flames, there was some good news for the couple when firefighters surprised them with their rescued three-tier wedding cake, along with some treasured photos.

Mr Leggett praised the firemen, adding: ‘Thank you so much for your guys’ efforts yesterday, the day was an absolute whirlwind of emotions and when we heard the pictures and the cake had been recovered, and then saw the firemen walk round the corner with it, was just indescribable. Thank you so, so much.’

Bridesmaid Grace Williams thanked the fire service on social media, and wrote: ‘Thank you to the amazing firefighters who salvaged the untouched wedding cake from the reception room from what should have been @Leggett84 wedding (at We The Curious) had it not been for the fire.

‘They salvaged old photos with huge sentimental value too. Thank you!’

The museum also thanked the fire service, and added that several other Bristol venues were able to accommodate the wedding party following the blaze.

Thick, black smoke was seen billowing from the rooftop, stopping the wedding before it had started

It said: ‘We’d like to say a massive thank you to our incredible staff for their hard work and dedication today, to our visitors for their understanding, and to the Avon Fire and Rescue team and police for their swift action.

‘We’d also like to say a big thanks to Bristol Hotel, SS Great Britain and Bristol Old Vic for supporting our wedding party today.’

It is believed that the blaze started when solar panels on the roof caught fire at about 2pm on Saturday.

The Avon Fire and Rescue team tackled the flames, believed to have been caused by solar panels on the roof catching fire