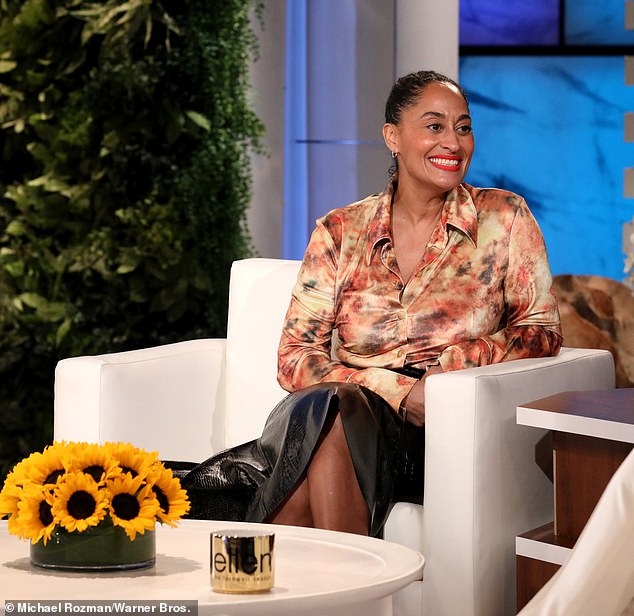 Tracee Ellis Ross is out on the promotional trial for the grand finale of her hit series black-ish, which included a stop on The Ellen DeGeneres Show that airs on Monday, April 11.

The hit television sitcom is wrapping up it’s eight-season run with one last episode that’s slate to air on April 18 on ABC.

During her stop to chat with Ellen, the six-time Emmy Award-nominee confessed to getting ‘very emotional’ during the closing chapter of the show.

Off the top, it quickly became obvious that Ross is still coming to terms with the ending of black-ish after eight years on the job as one of the main stars.

When asked by Ellen how she was doing with the closing of the series, she shared that it was ‘very emotional.’

Dressed in a black leather skirt and orange-patterned button-down shirt, she continued, ‘The whole season I knew was the end so I was very present and very aware endings, you know.’

She went on to confess that she even got sentimental and emotional with the things that bothered her.

Bittersweet ending: Off the top of the show, it quickly became obvious that Ross is still coming to terms with the ending of black-ish after eight years on the job as one of the main stars

Emotional: When asked by Ellen how she was doing with the closing of black-ish, the actress shared that it was ‘very emotional’

It turns out her emotions got heightened even more as the final days of shooting approached.

‘But the last week I said to myself “let yourself feel whatever comes up”, and had a lot of tears,’ the actress confessed, before adding that it was also ‘really wonderful to be able to take a moment.’

Ross, 49, took solace in conferring with her fellow cast and crew.

‘I was talking to everybody and hearing their experience in the eight years; what about it was so special for them. Because we’ve been the same family for eight years. Most of our crew is the same and everything.’

Confessional: ‘The whole season I knew was the end so I was very present and very aware endings, you know’

During the episode, the actress joins Ellen to play the 5 Second Rule

The Los Angeles native would again share how the finale of black-ish was ‘very emotional.’

‘And as I was saying to you in the break, there’s no ritual around ending a TV show, and it’s a hard thing to end when it becomes your world and your family,’ she admitted. ‘I spent more time with everyone on set than what I did with my family.’

After agreeing with Ross about how her own talk show had become family over the years, and that ending it will be ‘bittersweet, DeGeneres shared how black-ish has become such ‘an important show that is, and was, and will always be. I mean it was an important show.’

Nodding in agreement, Ross shared, ‘I leave with a lot of joy and pride.’

During their conversation, the actress also reveal the famous people who came over to her house when she was growing up, and she joins Ellen to play the 5 Second Rule.

Again, this episode of The Ellen DeGeneres Show, with Tracee Ellis Ross, airs on Monday, April 11.

The grand finale: The final episode of black-ish airs on April 18