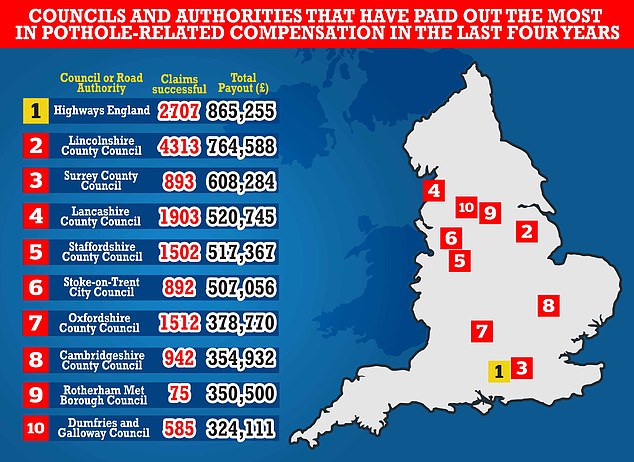 Motorists in Britain have been awarded almost £13million in compensation for damage to their vehicles caused by potholes in the last four years, according to a new study.

Councils and road authorities have been paying through the nose to cover the garage bills of drivers who have damaged vehicles on craters on roads.

However, of the 145,000 compensation claims made between January 2018 and October 2021, just a quarter have had their repair costs reimbursed.

Gone to pot: These are the 10 authorities and councils that paid out the most in compensation to motorists for pothole damage caused to vehicles

The new figures have been uncovered in an exclusive investigation by WhatCar?.

It found that 37,366 motorists have made successful pothole damage compensation claims in the last four years, which represents a 25.7 per cent success rate.

The grand total paid out across all councils and operators amassed to a massive £12,991,216.81 – which works out at around £347 per successful claim.

According to the Asphalt Industry Alliance’s latest ALARM report on the state of roads in England and Wales, the average cost to fill a pothole is £47.42 – though it also says that the total bill to repair the nation’s badly-rutted roads has now surpassed £12.6billion and will take nine years to rectify.

Of all the authorities paying out the biggest sums, Highways England – now renamed National Highways – has the largest compensation bill.

The Government agency manages the Strategic Road Network, meaning it is responsible for every pothole on the 4,300-mile network of motorways, dual carriageways and other A-roads.

In the four year period reviewed, Highways England forked out a whopping £865,254.75 in pothole-related damage claims.

What Car?’s investigation revealed the top 20 councils and authorities that paid out the most compensation between January 2018 and October 2021

Lincolnshire County Council received the highest number of damage claims across the four years, with 8,810 claims, of which 4,313 were successful, and £764,588.00 paid out in compensation – representing £177 per claim

Of the 344 local councils and roads authorities who responded to What Car?’s freedom of information request, 161 of them stated they were unable to provide figures as road compensation often fell under the remit of county and city councils, rather than borough or district councils.

The latter is one of the councils that has invested in a specialist piece of heavy-duty pothole repairing machinery in a bid to improve its road surfaces and cut back on the half a million pounds it has paid out in compensation to drivers in the previous four years.

This is Money recently had exclusive access to the council’s JCB PotholePro and found it was six times faster than a traditional road gang.

This is the JCB PotholePro. It costs £165,000 and can repair a crater in a claimed 8 minutes

Lincolnshire County Council received the highest number of damage claims across the four years, with 8,810 claims, of which 4,313 were successful, and £764,588.00 paid out in compensation – representing £177 per claim.

Wiltshire Council was found to have the highest share of compensation claims paid, with 86.6 per cent of the 1,594 claims paid, totalling £302,911.10 over the four-year period.

Slough Borough Council and Stoke-on-Trent City Councils were the second and third highest, paying out 64.9 per cent and 62.4 per cent of all claims respectively. In total, 11 councils across Britain paid more than half of all claims.

As part of the investigation, What Car? also surveyed 470 motorists with 23.6 per cent reporting they’ve damaged their vehicle in the past 18 months from hitting a pothole.

Two-thirds of respondents were aware they could claim for the damage caused from their local roads authority, though just 10.2 per cent had ever done so.

What Car? editor Steve Huntingford said: ‘The poor state of Britain’s roads is nothing new, but recently it’s been brought into greater focus by everything from reports of celebrities filling potholes on local roads to the most recent ALARM report highlighting the vast costs and resources needed to bring our network up to standard.

‘Our investigation has shown the considerable number of claims motorists have submitted up and down the country for damage caused by poor road conditions and the significant outlay local authorities have to bear to compensate motorists.

‘This is in addition to scheduled expenditure on maintaining and repairing roads.’

Has your car suffered pothole damage? Here’s how to get compensation

If your car has suffered damage as a result of driving though a pothole, here’s our five-step guide to getting compensation

Make a note of where the pothole is located, the time and date you drove through it and take a photo of the damage to your vehicle. If you didn’t do this at the time of the incident, you can return to the scene of the crime to take pictures.

If possible, take your car to a garage and ask for a mechanic’s report in writing for the projected cost to fix the problem – or if your motor isn’t drivable, phone a reputable repair centre and request a quote.

2. Work out who is to blame

To make a claim for compensation, first you need to know who should pay out. If the pothole is on a motorway or main trunk road, the chances are it is a National Highways problem. For local roads, you will need to research which council is responsible.

Once you’ve identified the party you need to contact, request a copy of highway maintenance schedules and number of reported incidents on the particular road for the previous 14 days as evidence that the road hasn’t been properly maintained or a reported pothole hasn’t been addressed.

You’ll need to issue a formal claim and most responsible parties will have a template you can request.

After making the claim, you should be notified if compensation is being granted. Though you can still reject the value of the offer if you believe it isn’t sufficient, especially if you have evidence that the pothole had already been reported but the responsible party had not acted to rectify it.

If the council refuses compensation, you can seek legal advice or make a case through the courts. However, a word of warning that this could be a time-consuming process and is likely to be worthwhile only if the repair bill is considerable.

5. Final option: Make a claim through your insurance

If you have comprehensive cover you can claim for pothole damage on your insurance policy. However, it’s worth considering the cost of the damage as well as your excess payments and if this action will affect your No Claims Bonus.