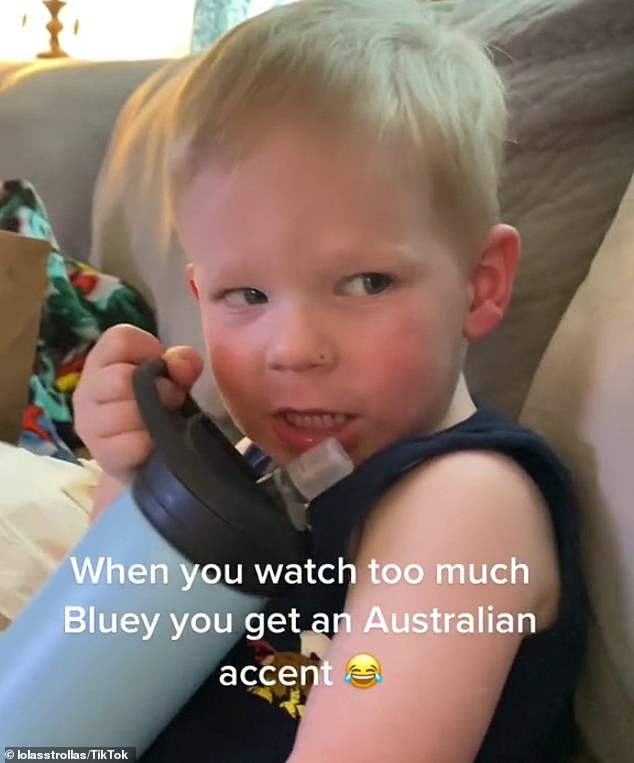 An American mum was puzzling over her toddler’s uniquely Australian twang when she finally realised where he picked it up from.

Candice, a mum from South Louisiana, said her son has been sounding especially Australian when saying ‘no’ and ‘no way’ and she couldn’t understand why.

Then she turned on the television, put on her son’s favourite program and said it ‘finally clicked’.

‘When you watch too much Bluey you get an Australian accent,’ she laughed in a caption of her little boy saying ‘no’ on demand.

The video of the youngster and his newly developed accent went viral on TikTok clocking up more than 220,000 views in 48 hours.

And people couldn’t believe their ears.

‘You are telling me that is not an Australian child?’ one person asked.

‘Far from it, we are from South Louisiana and this is not our accent,’ she replied.

And it even had Australians fooled.

‘Me trying to listen for him saying it different… then realising it sounds normal cause I’m Australian,’ one woman said.

But Candice isn’t the only mum with kids developing Australian accents and vocabularies after becoming invested in the show.

‘My daughter used the word dunny for toilet the other day and calls her brother cheeky,’ one mum laughed.

This floored some Australians who didn’t realise ‘cheeky’ isn’t a word used in the US.

‘I have never heard the term cheeky before watching Bluey,’ Candice said.

‘It is not a common word here, I am from Minnesota,’ said the second mum.

‘I feel this, I have been called mate and cheeky too many times,’ said another.

Even the way international viewers turn their phrases has been changed, according to one mum.

‘My daughter says this all the time – and I never knew where it came from – now I do,’ said another.

Bluey follows the story of a Blue Heeler puppy and her sister Bingo who go on adventures which often unfold in ‘hilarious’ ways.

The Blue Heeler family live in the suburbs and each cartoon is just seven minutes long.