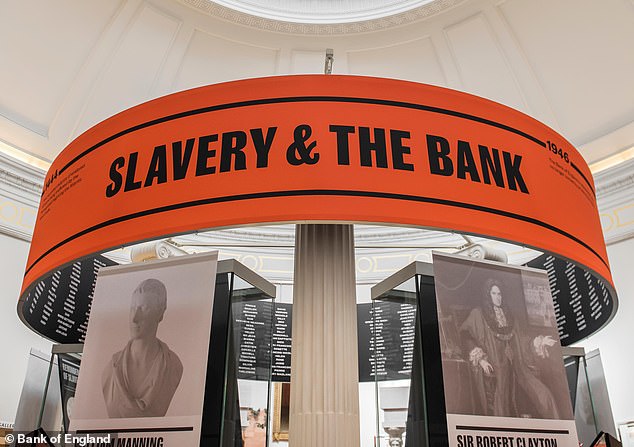 The Bank of England owned nearly 600 slaves when it acquired two plantations on the Caribbean island of Grenada in the 1770s, new research has revealed.

The startling fact came to light in a study commissioned after the 2020 Black Lives Matter protests.

Now, an exhibition opening this week at the bank’s headquarters in Threadneedle Street, London, will commemorate the names of each of the 599 slaves, The Guardian reports.

As a trading ground for sugar, coffee and slaves, Grenada was a place where fortunes were made and lost in the late 18th Century – affected by Britain’s wars with France and American independence.

The Bank of England has apologised for its links to slavery – with no fewer than 25 of its governors and directors the owner of slaves.

In June, the bank it that although it was never ‘directly involved’ in the slave trade, it acknowledged the ‘inexcusable’ actions of some of its leaders and removed two busts and eight paintings.

Now will present the findings of its historical analysis in full at the free exhibition.

A new exhibition opening this week at the Bank of England’s headquarters in Threadneedle Street, London, will commemorate the names of each of the 599 slaves it once owned

‘This research found that in the 1770s the Bank made loans to a merchant company called Alexander & Sons.

‘When the business defaulted on those loans, the Bank came into possession of two plantations in Grenada which had been pledged as security for the loans.

‘Our research has found that 599 enslaved African people lived and worked on those plantations. The Bank subsequently sold on the plantations.’

Some of the UK’s biggest high street banks including Barclays, HSBC, NatWest Group and Lloyds have been examining their historical ties to the slave trade, as has brewer Greene King.

For more information about the exhibition, visit here.