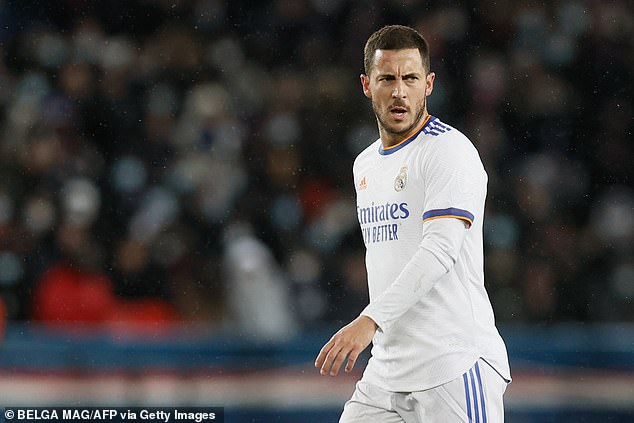 Eden Hazard’s brother Kylian insists the winger won’t leave Real Madrid this summer despite claims of a shock move to Arsenal: ‘He will do everything to prove he is the best player at Real’

Eden Hazard’s brother has dismissed suggestions that the winger could leave Real Madrid for Arsenal.

Hazard has endured a frustrating time this season and hasn’t scored in LaLiga, while he is currently out injured and has to undergo ankle surgery.

It was recently claimed by Foot Mercato that the former Chelsea star could join Arsenal on an initial loan deal that could become a permanent transfer.

The report stated that talks had taken place between Arsenal and Hazard’s representatives.

However, Kylian Hazard, who is on loan at RWOM from Cercle Brugge, is adamant that his brother won’t leave The Bernabeu.

In fact he insisted that Eden Hazard is determined to prove that he is the best player at Real and will not leave until he has achieved that objective.

Hazard, who has struggled for form and fitness, has been linked with a move to Arsenal

‘He’s proven himself at every club he’s been to, and for me, he doesn’t want to leave.

‘I don’t think he’s going to leave. If the president wants him to leave, if he knows he has no chance to play, then I don’t think that he will stay. But I can assure you of one thing: he will do everything to prove that he is the best player at Real.’

There have also been reports that Hazard could head to Borussia Dortmund, where another of his brothers, Thorgan, plays. Kylian, though, doesn’t feel that such a deal will materialise.

Eden Hazard has just over two years remaining on his contract at Real, with his time at the club having not gone to plan so far as he has struggled for form and fitness since joining from Chelsea for £89million. He did, however, win LaLiga in 2019-20, his first season at the club.

In total Hazard has scored six goals and provided ten assists in 65 appearances for Real.